Signatures for a novel electronic phase that enables charge to flow spontaneously in loops have been observed in a kagome superconductor.

The kagome pattern, a network of corner-sharing triangles, is well known amongst traditional Japanese basket weavers – and condensed matter physicists.

The unusual geometry of metal atoms in the kagome lattice and resulting electron behavior makes it a playground for probing weird and wonderful quantum phenomena that form the basis of next-generation device research.

Materials that exhibit so-called ‘high-temperature’ superconductivity, at temperatures achievable with liquid nitrogen cooling (or even at room temperature), are a tantalizing prospect.

Finding and synthesizing new materials that exhibit unconventional superconductivity has become the condensed matter physicist’s Holy Grail — but getting there involves a deeper understanding of exotic, topological electronic behavior in materials. 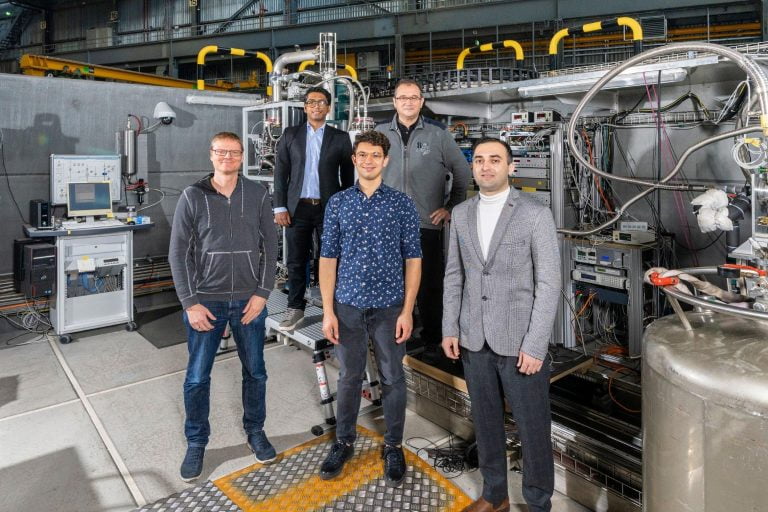 An exotic type of electron transport behavior that results in a spontaneous flow of charge in loops has long been debated as a precursor to high-temperature superconductivity and as a mechanism behind another mysterious phenomenon: the quantum anomalous Hall effect.

This topological effect, the subject of F. Duncan M. Haldane’s 2016 Nobel Prize winning work, occurs in certain two-dimensional electronic materials and relates to the generation of a current even in the absence of an applied magnetic field.

Understanding the quantum anomalous Hall effect is important not only for fundamental physics, but also for the potential applications in novel electronics and devices. Now, a PSI-led international collaboration has discovered strong evidence supporting this elusive electron transport behavior.

These magnetic fields break so-called time-reversal symmetry, a type of symmetry that means that the laws of physics are the same whether you look at a system going forward or backward in time.

A natural explanation of the occurrence of time-reversal symmetry-breaking fields is a novel type of charge order. The charge ordering can be understood as a periodic modulation of the electron density through the lattice and rearrangement of the atoms into a higher-order (superlattice) structure.

The team focused their study on the kagome lattice, KV3Sb5, which super conducts below 2.5 Kelvin. Below a higher critical temperature of approximately 80 Kelvin, a giant quantum anomalous Hall effect is observed in the material, which was previously unexplained.

The discovered time-reversal symmetry-breaking fields implies an exotic type of charge order where currents move around the unit cells of the kagome lattice, known as orbital currents. These produce magnetism dominated by the extended orbital motion of the electrons in a lattice of atoms.

“Experimental realization of this phenomenon is exceptionally challenging, as materials exhibiting orbital currents are rare and the characteristic signals [of orbital currents] are often too weak to be detected,” explains corresponding author, Zurab Guguchia, from the Lab of Muon Spin Spectroscopy at PSI, who led the team.

An extremely convincing piece of evidence

To search for the long-disputed orbital currents, the physicists used highly sensitive muon spin rotation/relaxation spectroscopy (µSR) to detect the weak, tell-tale magnetic signals that they would generate.

Muons implanted into the sample serve as a local and highly sensitive magnetic probe to the internal field of the material, enabling magnetic fields as small as 0.001 µBohr to be detected. In the presence of an internal magnetic field, the muon spin depolarises.

The muons decay into energetic positrons, which are emitted along the direction of the muon spin, carrying with them information on the muon spin polarisation in the local environment.

The researchers observed how, as the temperature is decreased to below 80K, the charge ordering temperature, a systematic shift in the magnetic signal appeared.

Using the world’s most advanced µSR facility at PSI, which enables application of fields up to 9.5 Tesla, the team could use an external high magnetic field to enhance the shift in the tiny internal magnetic fields and provide even stronger evidence that the magnetic field was due to internal orbital currents.

“We first performed the experiment with no external field,” explains Dr. Guguchia, “and when we saw the systematic shift appear below the charge ordering temperature, we felt very motivated to continue.

But when we then applied the high field and could promote this electronic response, we were delighted. It’s a very, very convincing piece of evidence for something that has remained elusive for a long time.”

Therefore, orbital currents have been proposed in a number of unconventional superconductors that exhibit a strangely large quantum anomalous Hall effect; namely graphene, cuprates, and kagome lattices, but actual evidence that they existed had been missing until now.

The discovery of time-reversal symmetry-breaking fields, which imply orbital currents — and the peculiar charge ordering that gives rise to them, opens doors to exotic avenues of physics and next-generation device research.

Orbital currents are considered to play a fundamental role in the mechanism of various unconventional transport phenomena including high-temperature superconductivity, with applications from power transmission to MAGLEV trains.

The concept of orbital currents also forms the basis of orbitronics — an area that exploits the orbital degree of freedom as an information carrier in solid-state devices.