(ORDO NEWS) — This network of long grooves and scratches is part of a giant fault system on Mars known as Tantalus Fossae, and is shown in an image taken by the ESA’s Mars Express probe.

At first glance, it seems that someone ran their nails along the surface of the Red Planet, cutting out long trenches in the process.

Although the formation of Tantalus Fossae (“Fossae” means depression or depression) is not as dramatic, it is a prominent feature of Mars. This depression system frames the low-relief, sprawling Martian volcano Alba Mons, running along the east side of the volcano.

The pits were formed when the top of Alba Mons rose to a height, causing the surrounding surface to become deformed, elongated and broken.

The Tantalus Fossae faults are an excellent example of surface features known as grabens; each depression was formed when two parallel faults parted, causing the rock between them to fall down into the resulting void.

The same features can be found on the west side of Alba Mons, forming an incomplete ring around the volcano. In general, the grabens associated with this volcano stretch for 1000 km in length, up to 10 km in width and up to 350 m in depth.

It is believed that these structures did not form at the same time, but one after the other, which gives scientists the opportunity to reconstruct the past chronology and a picture of what created this dramatic landscape.

For example, the large impact crater in the center of the image is traversed by grabens, indicating that it existed before the Tantalus Fossae faults formed. The second largest impact crater, but much smaller, is superimposed on faults and is therefore most likely younger.

On closer inspection, many small branched valleys can be seen in this region. These valleys seem to be cut directly by grabens, and therefore it is assumed that they are older.

This area is named after Tantalus, the son of Zeus and Pluto, who, according to Greek legend, betrayed the gods and was forced by Hades to stand in the water under a fruit tree.

When he tried to drink, the water receded, and when he tried to eat, the branches of the tree moved out of his reach a punishment known as Tantalum’s agony.

Mars Express has been orbiting the Red Planet since 2003, taking pictures of the surface of Mars, mapping its surface composition, determining the composition and circulation of its fragile atmosphere, exploring the underground crust, and studying the interaction of various phenomena in the Martian environment.

The High Resolution Stereo Camera (HRSC) responsible for these new images has revealed a lot about the various features of the Martian surface. The latest images show everything from wind-cut ridges and furrows to volcanoes, impact craters, tectonic faults, riverbeds and ancient lava pools. 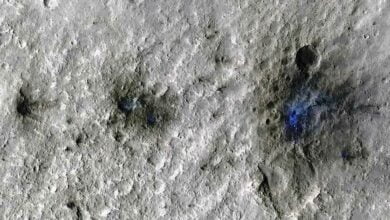