(ORDO NEWS) — Imagine that you are walking through a forest and your foot hits a log. On its underside is something wet, yellow, and branching into beautiful fractal branches.

This is a Plasmodium of Physarum polycephalum, a multi-headed slime mold. Like other naturally occurring slime molds, it plays an important ecological role by helping to decompose organic matter so that it can be returned to the food web.

This bizarre little organism has neither a brain nor a nervous system; its bright yellow body is just one cell. This kind of slimy mold has thrived, more or less unchanged, for a billion years in its damp habitats.

And in the last decade, it has changed the way we think about cognition and how to solve complex problems.

“I think it’s the same kind of revolution that happened when people realized that plants can communicate with each other,” says biologist Audrey Dussoutour of France’s National Center for Scientific Research.

“Even these tiny microbes can learn.”

P. polycephalum, to which Dussutour gave the charming nickname “Ball”, is not a rare species. It can be found in dark, damp, cool environments, such as leafy forest flooring. In addition, it is very unusual: although we call it “mold”, it is not actually a fungus.

This is not an animal or a plant, but a representative of the protist kingdom – a kind of comprehensive group for everything that cannot be unambiguously attributed to the other three kingdoms.

It begins its life as many individual cells, each with a single nucleus. They then fuse to form Plasmodium, the vegetative stage of life in which the organism feeds and grows.

In this form, moving through its veins in search of food and studying the environment, it is still a single cell, but contains millions or even billions of nuclei floating in a cytoplasmic fluid enclosed in a bright yellow membrane.

Knowledge without a brain

Like all organisms, P. polycephalum needs to be able to make decisions about its environment. He must seek food and avoid danger. He needs to find the ideal conditions for his reproductive cycle.

And this is where our little yellow friend gets really interesting. P. polycephalum does not have a central nervous system. He doesn’t even have specialized tissues.

However, he can solve complex puzzles such as mazes and memorize new substances. Tasks that, as we used to think, only animals can do.

“We are talking about cognition without a brain, obviously, but also without neurons at all. So the underlying mechanisms, the whole architecture of how it works with information, is completely different from how your brain works,” says biologist Chris Reed from Macquarie University. in Australia.

“Having given it the same problem solving tasks that we have traditionally given animals with brains, we can begin to understand how this fundamentally different system can come to the same result.

This is where it becomes clear that for many of these things – which , as we have always believed, require a brain or some higher information processing system – this is not always necessary.

P. polycephalum is well known to science. Decades ago, as physicist Hans-Günther Döbereiner of the University of Bremen in Germany explained, it was “the workhorse of cell biology.” It was easy to clone, store and study.

However, as genetic analysis tools have evolved, organisms such as mice or cell strains such as HeLa have taken over, and P. polycephalum has faded into the background.

In 2000, biologist Toshiyuki Nakagaki of Japan’s RIKEN institute resurrected it – and not for cell biology. His paper, published in the journal Nature, was titled “Maze Solving by an Amoeboid Organism” – and that’s exactly what P. polycephalum did.

Nakagaki and his team placed a piece of plasmodium at one end of the maze, a food reward (oats, because P. polycephalum loves oat bacteria) at the other, and watched what happened.

The results were stunning. This strange little acellular organism was able to find the fastest way through all the mazes that were offered to it.

“This has sparked a wave of research into what even more complex scenarios we might experience slime mold in,” Reed says.

“Almost all of them were unexpected to some extent and surprised the researchers with how the slime mold actually manifested itself.

There were also some limitations. But mostly it was a journey of revelations about how this simple creature can perform tasks that have always been set and considered the lot of higher organisms.

Nakagaki recreated the Tokyo subway with station junctions marked with oats; P. polycephalum recreated it almost exactly – except that the slimy mold version was more resistant to damage, and if any link was broken, the rest of the network could continue to work.

Another group of researchers found that this species could effectively solve the traveling salesman problem, an exponentially difficult mathematical problem that programmers commonly use to test algorithms.

Earlier this year, a team of researchers found that P. polycephalum can “remember” places where it has previously found food based on the pattern of veins in that area.

This follows previous research by Dussutour and her colleagues, who found that slime molds can learn and remember substances they don’t like, and pass that information on to other slime molds after they merge.

“I’m still amazed at how, in a sense, they are complex, because they always surprise you in the experiment, they will never do exactly what you want,” says Dussutour.

In one case, her team was testing a mammalian cell growth medium and wanted to see if slime would like it.

“She hated her. She started building this strange three-dimensional structure so she could move on the lead and escape. And I said, ‘My God, this organism is sentient.'”

Although technically a single-celled organism, P. polycephalum is considered to be a network that exhibits collective behavior. Each part of the slime mold works independently and communicates with neighboring parts, without centralized processing.

“I think the analog could be neurons in the brain,” Reed said. “You have one brain made up of many neurons – the same goes for slime mold.”

This brain analogy is indeed intriguing, and this is not the first time that P. polycephalum has been compared to a network of neurons. The topology and structure of the brain and mucosal networks are very similar, and both systems exhibit oscillations.

It is not entirely clear how information is distributed and exchanged in the mucosal mold, but we do know that the veins of P. polycephalum contract and act as a peristaltic pump, moving the cytoplasmic fluid from section to section. And fluctuations in this fluid seem to coincide with encounters with external stimuli.

“These fluctuations are believed to transmit information, process information by interacting with each other, and actually create behavior at the same time,” Döbereiner said in an interview with ScienceAlert.

“If the Physarum network goes to a certain food, then when it encounters sugar it changes its vibration pattern: it starts to oscillate faster. Due to these faster vibrations, the whole organism starts to change its oscillation pattern and starts to flow in the direction where the food was found” .

In 2021, he and his colleagues published a paper demonstrating that these oscillations are extremely similar to those seen in the brain, only they are a hydrodynamic system and not electrical signals. 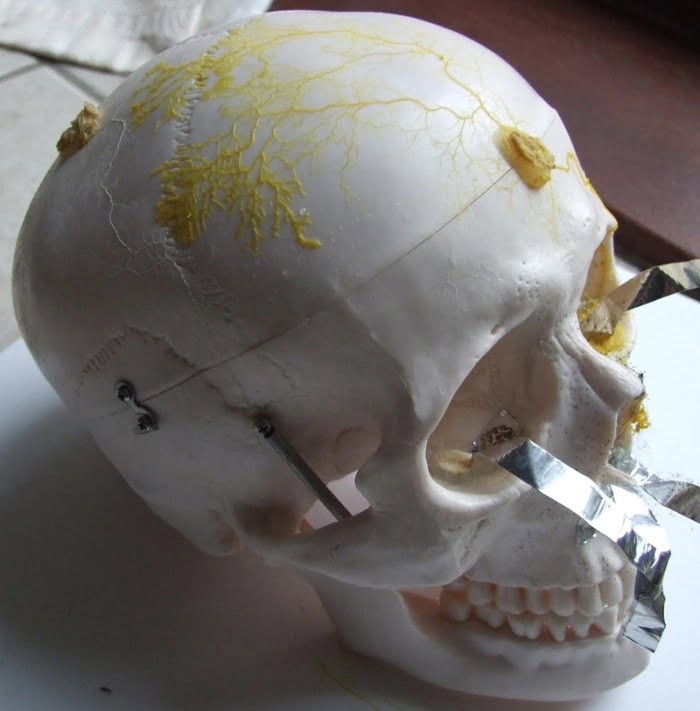 As exciting as his actions may seem, any researcher who works with him will tell you that P. polycephalum itself is not a brain. As far as we can tell, he is not capable of high-level data processing or abstract thinking.

As intriguing as this idea is, slime is also unable to evolve into anything resembling a brain. The organism has had a billion years to do this and shows no signs of moving in that direction.

In terms of general biology, slime mold is extremely simple. And it is this fact that changes our understanding of problem solving.

Like other organisms, it needs food, it needs to navigate its environment, it needs a safe place to grow and reproduce.

These problems can be complex, yet P. polycephalum can solve them with its extremely limited cognitive architecture. It does it in its own simple way and with its own limitations,” Reed says, “but that in itself is one of the great things about the system.”

In a sense, this leaves us with an organism – a wet, slimy, damp-loving blob – whose cognition is fundamentally different from our own. Ion can teach us new ways to solve our own problems.

“It teaches us about the nature of intelligence, challenging certain views and essentially expanding the concept,” Reed said.

“It forces us to challenge these long-held anthropocentric beliefs that we are unique and capable of so much more than other beings.”