US, WASHINGTON (ORDO NEWS) — The analytical agency Strategy Analytics conducted a fresh study, the results of which not only showed that the global market for tablet computers decreased by 12%, but also helped to compile the most current rating of the largest tablet manufacturers.

Interestingly, despite the crisis and supply problems from China, Apple remains the leader in the tablet market .

At the same time, and no less important, the American tech giant managed to get as close as possible to the mark of 30% of the entire market for the first time in the last 7 years – it was in 2013 that the company achieved similar successes. In second place, “squeezing” 14.6% of the market, was Samsung.

The third place remained for Chinese Huawei (the company has 9.4% of the market), but this time it was very difficult to maintain its position, especially in connection with the failure in the domestic market due to coronavirus. 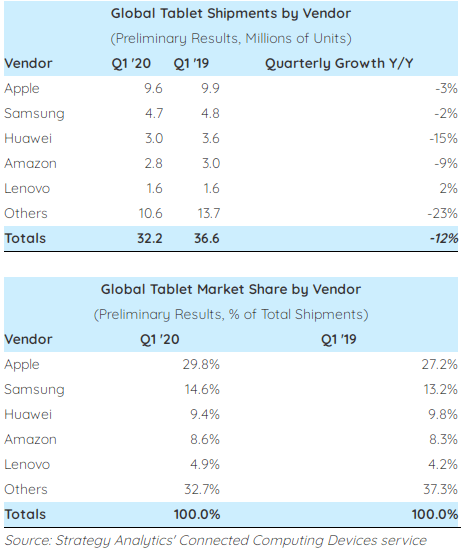 Recall that a little earlier, Apple representatives said that the company in the second quarter hopes for a stable demand not only for its own Mac computers, but also for tablets of the iPad line.