(ORDO NEWS) — Chinese and American scientists have discovered in Burmese amber a male empidoid fly (Empidoidea) with a marriage gift in the form of salivary gland secretions.

This is the first discovery of a marriage gift in the fossil record. In addition, the discovery made it possible to clarify the details of the evolution of this phenomenon among empidoid flies. The study was published in the journal Gondwana Research.

Many animals give mating gifts to partners before mating. In hermaphrodites, both partners exchange them, and in dioecious animals, this is usually done by males, the only known exception is the female bug Phoreticovelia disparata.

At the same time, gifts can be both endogenous, that is, of their own production (for example, hemolymph or salivary gland secretions), and exogenous – prey or inedible objects.

On the other hand, gifts can increase the attractiveness of males. In addition, among spiders and predatory insects, gifts save males from sexual cannibalism.

The most diverse marriage gifts in insects. Among them, flies from the pusher family (Empididae) stand out. They got their name due to the fact that males form clusters in the air before mating, in which they “hustle” in one place. Representatives of the subfamily Empidinae take a marriage gift with them.

As a gift, empidines usually use prey – other insects wrapped in endogenous silk threads or foam from the salivary glands.

Sometimes a gift can be without “gift wrapping” at all. And in some species, the shell may contain fragments of plants that pushers do not feed on, or even be empty.

Scientists assumed that such empty gifts appeared in evolution later than other varieties. However, this hypothesis was difficult to test, since marriage gifts have not yet been found in the fossil record – neither in pushers, nor in any other animals. 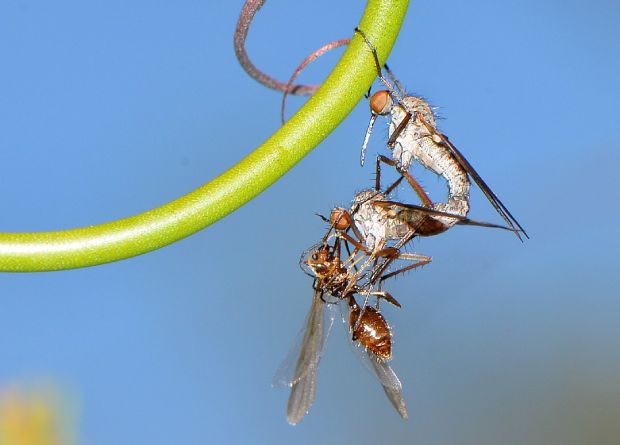 Chufei Tang of the Jiangsu Academy of Agricultural Sciences and colleagues from China and the United States corrected this situation.

In a 99-million-year-old piece of Burmese amber, scientists discovered a male fly from the family of non-pretty flies (Atelestidae), which belongs to the same superfamily of empidoid flies (Empidoidea) as pushers.

The insect itself belonged to the already known extinct species Alavesia lanceolata. Between the limbs of the insect, the researchers found an empty foamy gift shell.

Up to this point, marriage gifts had only been observed in a rather young group of Empidinae, so it was believed that this phenomenon in empidoid flies arose in the Paleogene. However, the found fossil indicates that this behavior appeared already in the Mesozoic.

In addition, this discovery suggests that empty gifts first appeared, which nevertheless served as nutritious food for females. And then, in the process of evolution, males began to switch to the use of external resources and include prey as a gift, and some species began to give it without an endogenous shell at all.