(ORDO NEWS) — Opabinia (Opabinia regalis) is one of the strangest creatures in the history of the Earth. She had five eyes and a long proboscis, with which she caught and sent her victims into the mouth.

For almost a hundred years, opabinia was considered a singular and unlike anything quirk of evolution, but now she has found a relative – Utaurora comosa.

Half a billion years ago, the Earth was inhabited by very strange inhabitants. They lived exclusively in the seas and from the very beginning were diverse.

The fact is that about 540 million years ago, the so-called Cambrian explosion began , when many groups of animals arose almost simultaneously. Among them, many looked completely exotic, so that paleontologists sometimes find it difficult to confidently judge their systematic position.

One of the most striking examples is, of course, Opabinia regalis . The famous American biologist Stephen Jay Gould called it “a strange miracle” and assigned a place among the most spectacular creations of evolution – along with Archeopteryx, Tyrannosaurus and the first human ancestors.

The appearance of opabinia really evokes the most alien associations. A primitive arthropod with five compound eyes and a proboscis ending in something like a grasping “claw”. With its help, the Cambrian predator caught victims and sent them to the mouth hidden behind, after which it swam further with the help of special blades on the sides of the body.

Unsurprisingly, the reconstruction of Opabinia regalis , first shown at a conference in 1972, drew laughter from the audience. But the most serious problems arose with its systematic position.

It is not hard to guess that Opabinia was something unique: she had a look that was exotic even by the standards of her Cambrian contemporaries. But they themselves are extremely strange . Say, radiodonts, led by anomalocaris, are the first owners of articulated limbs.

Quite a few radiodonts are known, thanks to which paleontologists have dealt with them well. At the same time, specimens of the only species of the genus Opabinia have not been found for more than a century. Then all of them were extracted from a single location – the Canadian Burgess Shale, which can be called a Cambrian treasury. 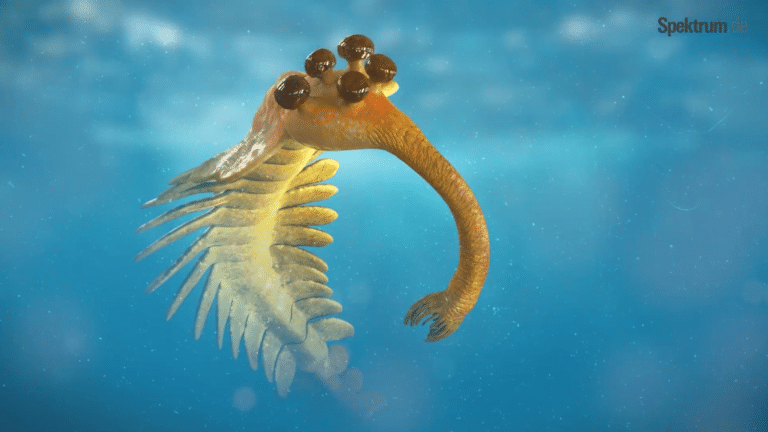 Therefore, paleontologist Stephen Pates was so surprised by one of the fossilized samples of the Museum of Natural History of the University of Kansas (USA). He was interested in radiodonts, but the next sample allegedly from this group did not have characteristic limbs.

“When I first looked at it, I could not understand what it was. But I didn’t buy the fact that I had a radiodont in front of me,” recalls Dr. Pates, now an associate at the University of Cambridge.

The fossil was named Utaurora comosa , after the state of Utah, where it was found, and the goddess of the dawn, Aurora. The fossil retained zigzag swimming protrusions along the edges of the body and many spines on the tail. These features bring Utaurora closer to Opabinia , the five-eyed loner on the evolutionary tree.

Unfortunately, the head of Utaurora has turned into a blot, including a significant part of the eyes and the signature proboscis . Therefore, now in reconstructions, artists have to dodge and either draw the appendage tucked up, or leave an empty space altogether.

In order to assess the relationship between Utaurora and Opabinia and radiodonts, the authors of a new article in Proceedings of the Royal Society B: Biological Sciences carefully examined 125 fossil features.

The same properties were considered for 50 other groups of arthropods, both extinct and now living. Scientists have built a detailed evolutionary tree and, with its help, have confidently disproved the relationship of Utaurora with radiodonts, placing it in the same group as Opabinia .

So now, next to radiodonts, a small but separate group of opabinids ( Opabiniida ) has appeared on the evolutionary tree of arthropods. So far , only Utaurora comosa belongs to it, along with its relative Opabinia regalis , which is no longer so isolated from the rest of the population of the Cambrian seas.