(ORDO NEWS) — The international experiment KATRIN has overcome an important psychological barrier – it has determined a new upper limit on the mass of one of the most elusive particles, which has finally crossed the mark of one electron volt.

This step brings the long-awaited moment of determining the exact mass of the neutrino, which can help cosmologists explain the nature of dark matter, and give particle physicists a reason to revise the Standard Model.

Neutrinos are one of the most elusive elementary particles in the universe. In cosmology, these fundamental particles play an important role in the formation of large-scale structures such as galaxies.

Whereas in elementary particle physics, their tiny but non-zero mass points to new physical phenomena that are beyond the scope of existing theories today. Without accurate measurements of neutrino masses, our understanding of the universe will remain incomplete.

This difficult task was undertaken by the international experiment KATRIN ( Karlsruhe Tritium Neutrino Experiment ) at the KIT Campus North of the Karlsruhe Institute of Technology (Germany).

Tritium beta decay is used to determine the mass of neutrinos that interact weakly with matter. Tritium is an unstable hydrogen isotope with two extra neutrons in the nucleus and a half-life of over 12 years.

In the beta decay of tritium, an electron and an electron antineutrino are formed, the mass of which is determined in the KATRIN experiment by measuring the energy distribution of electrons.

Since scientific measurements began in 2019, their accuracy has steadily improved. “KATRIN is an experiment with the highest technological requirements, and now it works like clockwork,” enthusiastically says Guido Drexlin , project leader at the Karlsruhe Institute of Technology and one of the two representatives of the experiment.

Another spokesperson, Christian Weinheimer of the University of Münster, adds: “Increasing signal strength and reducing background noise were crucial steps to achieve the new result.” 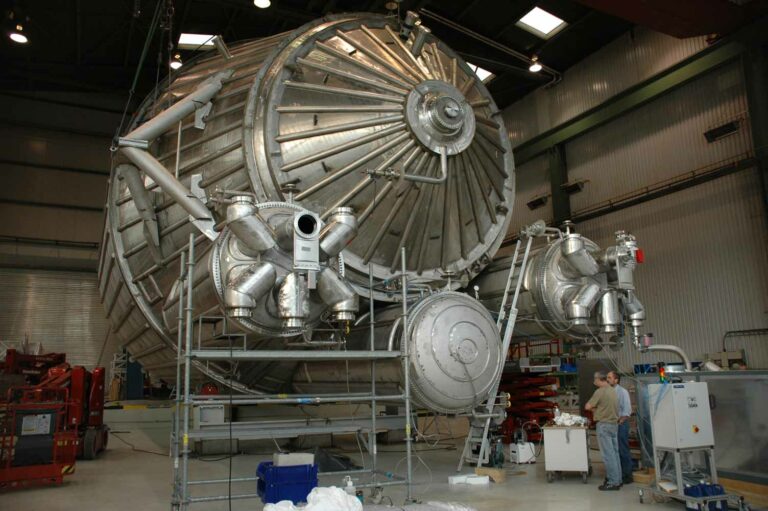 “Every influence, no matter how small, must be studied in detail and eliminated. It was only with this time-consuming approach that we were able to eliminate the bias of our result due to confounding processes,” explain the data analysis coordinators.

Combined experimental data from the first year of measurements with results obtained in 2021, resulting in a new upper limit for the mass of neutrinos, equal to 0.8 electron volts.

For the first time in history, a direct experiment to measure the mass of a neutrino entered the cosmologically and physically important mass range – sub-electronvolt (that is, less than one electron volt), where the fundamental scale of neutrino masses is supposed to be located.

“The particle physics community is thrilled that KATRIN has crossed the one electron volt barrier,” said neutrino expert John Wilkerson of the University of North Carolina, chairman of the executive board, and co-author of the study.

Neutrino mass measurements will continue until the end of 2024. At this time, the KATRIN experiment team will not only collect statistics of beta decay events, but also reduce the noise level – for example, by optimizing the design and electromagnetic field of the spectrometer.

In the further fate of the project, a new detector system (TRISTAN) will play a special role, which will allow KATRIN to start searching for so far only theoretical “sterile” (or inert) neutrinos with masses in the kiloelectronvolt range — candidates for mysterious dark matter.

Unlike ordinary, active neutrinos, which participate in weak and gravitational interactions, sterile neutrinos interact with matter only gravitationally, just like that very dark matter.