(ORDO NEWS) — When it comes to legends, none is as cinematic as the legend of the Assassins (Ḥaššāšīn in Persian), who struck fear into the hearts of Middle Eastern leaders during the Middle Ages.

Hasan-i Sabbah, nicknamed the Old Man of the Mountain by Marco Polo, was the leader of the Nizari Ismaili order in the late 11th century. These were the famous Assassins who created a network of mountain fortresses and posed a threat to the Sunni Seljuk power in Persia.

Perhaps the Assassins were best known for the way they disposed of their opponents – through highly skilled assassinations. In fact, it is believed that the word “assassin” originated with the Assassins.

The complex history of the legendary assassins

Although there are many stories about assassins, it is quite difficult to separate fact from fiction. First, most of the historical evidence about the Assassins comes either from European sources or from people who were hostile to them.

The history of the Assassins goes back to the original schism in Islam that took place in 632 AD. At the time, Muslims were arguing over who would succeed the Prophet Muhammad as their leader, which caused a rift between Shiites and Sunnis.

The Nizari Ismaili state then emerged from Shiite Islam when another power struggle forced the followers of the Ismaili prince Nizar to flee into the mountains of Persia.

In search of a base for missionary activity, Hasan-i Sabbah chose the Alamut castle in modern Iran. Its location was ideal, with a bird’s eye view of the surrounding valley.

As a result of a campaign that lasted about two years, during which the inhabitants of the surrounding areas were converted to Christianity, Hasan-i Sabbah managed to conquer the castle in 1090.

A scholar and devoted to his religion, he is remembered for knowing the Qur’an by heart and spreading Nizari Ismailism from his new base camp at Alamut Castle.

He then established strongholds in the mountainous regions of Persia and Syria, equipped with sophisticated water infrastructure and built to withstand sieges. Some of their remnants can still be visited today, including the partially restored Alamut Castle or Lambsar Castle in the Alburz Mountains of Iran.

Hasan-i Sabbah is also known for creating a military group of trained Fedayeen fighters (meaning “self-sacrifice” in Arabic) known as the Order of Assassins or Assassins. The Nizari Ismails, greatly outnumbered, were hated by both the Shia Muslims and the Sunni Muslims who surrounded them on all sides.

The Assassins became known for their deadly tactics and religious devotion, which were developed due to their precarious position. 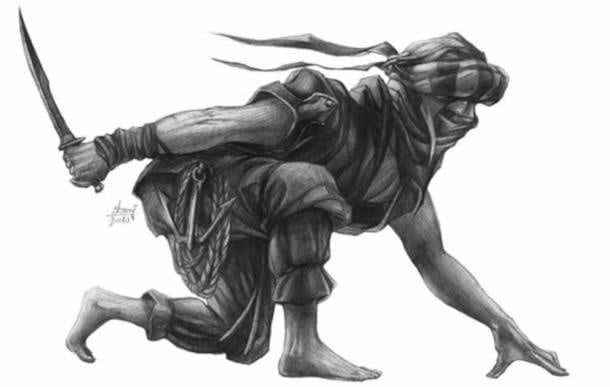 Marco Polo and the drugged assassins

According to a story heard in the East by the Italian traveler Marco Polo, Hasan-i Sabbah drugged his followers with hashish, an extract of the hemp plant. When they came to their senses, Hasan-i-Sabbah declared that only he had the means to allow them to return to paradise.

According to this version of events, the Fedayeen’s loyalty was fueled by drugs and made them do whatever he wanted.

However, there are some problems with this story. For example, the use of hashish may have been an early case of fake news or simple ignorance.

Due to a lack of men and resources, the fedayeen developed subversive guerrilla strategies in which they carried out precise assassinations of specific targets, enemies of the Nizari Ismailis.

Some argue that the term assassin “hashshashin” comes from a derogatory Arabic word used to refer to users of hashish – “hashishin”.

“Historians believe that Western observers, who did not understand why the Nizari fought with guerrilla tactics, assumed that they were under the influence of some kind of drug, such as hashish,” explains National Geographic.

Others argue that the term “hashish” was first used by the Fatimid caliph al-Amir in 1122 as a derogatory reference to the Syrian Nizari.

Instead of the literal meaning that these people took the drug hashish, some argue that it should have been taken figuratively, as a way of referring to “outcasts” or “rabble.”

The term was applied by anti-Isma’ili historians to the Syrian and Persian Isma’ilis and eventually spread across Europe through the Crusaders. It is believed that the term “assassin” is rooted in the word “hashshashin”.

The Assassins are remembered for their killings, which they carried out for almost 200 years. However, some even question the Assassins’ reputation as cold-blooded killers.

Indeed, there were people who were killed by the Assassins in broad daylight, but their reputation preceded them, and for a time in their era it was customary to blame any significant political assassination on the Assassins.

Perhaps one of their most famous victims is Conrad of Montferrat, the de facto king of Jerusalem at the end of the 12th century. Legend has it that Konrad was killed while walking through the courtyard of the city of Tyre with a retinue of respectable knights.

Two Assassins dressed as Christian monks approached the center of the courtyard and stabbed Conrad twice, killing him. While it is not known who hired these Assassins, it is commonly stated that Richard the Lionheart and Henry of Champagne are responsible.

The use of psychological warfare by the Assassins

What is even more impressive than the audacity of the Assassins is perhaps their effective use of psychological warfare. By instilling fear in their enemies, they won their obedience without risking their own lives. The great Muslim leader Saladin, for example, survived two Assassin assassination attempts that left him paranoid and afraid for his life.

One story claims that one night during the conquest of Masyaf in Syria, Saladin woke up to see someone coming out of his tent. Next to his bed, he found hot cakes in the form characteristic of the Assassins, as well as a note pinned with a poisoned dagger.

The note contained a threat that he would be killed if he did not back down. Needless to say, Saladin decided to make a truce with the Assassins.

Despite their fame and skill, the Assassins were razed to the ground by the Mongols who invaded Khorezm. In 1256, the stronghold of the Assassins in Alamut, once considered impregnable, fell under the blows of the Mongols.

Although the Assassins managed to recapture and hold Alamut for several months, they were finally defeated in 1275.