(ORDO NEWS) — The magnetic field of our planet continues to weaken, and the largest decline is observed in the area between Africa and South America.

On December 27, 2018, we published an article “The Earth’s magnetic field is weakening due to some kind of anomaly under Africa” and, as you probably already guessed, this process began to gain momentum.

Such behavior of the Earth guards geophysicists, because it can lead to malfunctions in the work of satellites.

The European Space Agency’s Swarm probe group was the first to notice a magnetic anomaly that expanded the zone of influence, rushing toward the South American continent.

Currently, the evolution of the magnetic field is immediately observed by American, European and Japanese probes, which record the rapid growth of the “magnetic hole”.

In the period from 1970-2020, the minimum induction of the Earth’s field fell from 24,000 nanotesla to 22,000 nanotesla, and the area of ​​the African anomaly began to expand westward at a speed of 20 kilometers per year.

In 2018, a new center of minimum magnetic intensity appeared in the southwest, and the reason for its appearance is still a mystery. 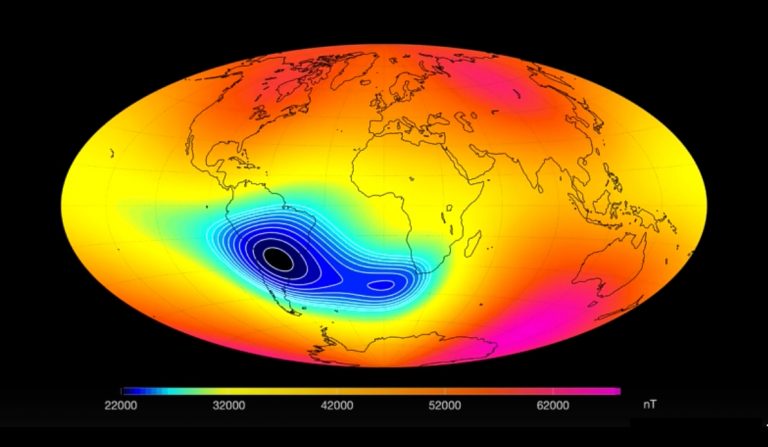 The growth of the “magnetic hole” and the emergence of new foci indicate that the internal processes of the Earth are much more complicated than scientists thought.

The second minimum under Africa is an anomaly that the existing dipole model is not able to explain. By analyzing the data arrays that transmit the probes, geophysicists hope to understand what processes in the bowels of the planet have led to what is observed today.

I would like to note that at present this does not threaten humanity in any way, but spacecraft, planes and ships moving over the region will probably encounter disruptions.

The guy does not know about the pandemic, although he has already been sick with coronavirus twice

How to keep youthful: named berry that slows down aging

The guy does not know about the pandemic, although he has already been sick with coronavirus twice

How to keep youthful: named berry that slows down aging