(ORDO NEWS) — The Milky Way galaxy is not very active. Each year it produces about three to four Suns of new stars throughout its spiral body, and stars of all ages can be found everywhere.

But there are galaxies even quieter – elliptical. galaxies for which most star formation has long ceased. In these galaxies, there are no or very few stars younger than a certain age, suggesting that at some point, star formation in most cases abruptly stopped, leaving the galaxy slowly fading away over millennia, star by star.

Exactly how star formation is turned off in these smooth, almost featureless galaxies remains a mystery, but astronomers believe it has something to do with the supermassive black holes found at the center of each galaxy.

Now, an international team of astronomers led by Kei Ito of the SOKENDAI Advanced Research University in Japan has peered into the early universe to find out if this is the case.

Using some of the world’s most powerful telescopes, they collected data on various wavelengths of light to identify galaxies whose light traveled 9.5 to 12.5 billion years through the abyss of space-time – ancient galaxies such as those elliptical galaxies which are closer to us in space and time, for which star formation is on the verge of extinction.

The next step was to use X-ray and radio data to determine the activity of the supermassive black hole. This is the mechanism by which astronomers believe that star formation can be suppressed.

When a supermassive black hole is active, it absorbs massive amounts of matter from the space around it. This process is erratic, violent, producing what is collectively known as “feedback”.

We all know that nothing can come from beyond the event horizon of a black hole, but the space around it is different. matter. Material swirls around the black hole like water in a sewer; gravity and friction generate intense radiation that propagates throughout the universe.

Another form of feedback takes the form of jets erupting from the black hole’s polar regions. Matter outside the event horizon is believed to be accelerated along the black hole’s external magnetic field and ejected from the poles in powerful, focused jets of plasma moving at a significant percentage of the speed of light.

Finally, active supermassive black holes generate strong winds that rush into their galaxies. All three forms of feedback radiation, jets, and wind are thought to heat up and repel the cold molecular gas needed to form young stars.

At such vast distances, galaxies are much harder to see; they are very small and very weak, from our point of view here and now. So the researchers had to “stack” the galaxies together to highlight radio and X-ray light, which are telltale signs of an active supermassive black hole all those billions of years ago.

This suggests that the researchers have concluded that it is highly likely that an active supermassive black hole plays a role in the sudden deaths of these mysterious, ghostly galaxies.

Future research could help shed light on the detailed physics of this enigmatic process, they said. 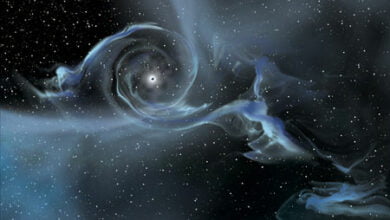