(ORDO NEWS) — Undoubtedly, the civilization of Ancient Egypt is full of wonders and mysteries beyond our understanding. An exceptionally ancient culture dating back to the early dawn of human development, Egypt left behind many man-made miracles. From huge pyramids, giant statues and huge monumental temples to a wide variety of monuments.

While some of them are easy to understand, study and explain, others remain an absolute mystery. One of these mysteries is the so-called “Disc Sabu”, a mysterious stone object that defies any logic. Over the years, many strange theories have arisen in an attempt to uncover its true purpose.

Anyone who visits the huge museum of antiquities in Cairo will be overwhelmed by the wealth of ancient Egyptian treasures it contains. From the famous treasures found in the tomb of Tutankhamun, to the statues of the pharaohs and well-preserved mummies, this museum is the number one stopover for all lovers of this ancient culture. But while you are overwhelmed by these popular treasures, one curious subject can easily be overlooked. Disc Sabu.

This strange object is round in shape and is approximately 610 millimeters in diameter and 104 millimeters in height. It was discovered in 1936 by the famous British Egyptologist Walter Brian Emery and has been dated to the earliest periods of Ancient Egypt.

Emery devoted his career to excavating the Nile Valley, and between 1935 and 1939, he conducted numerous studies and excavations at the Saqqara burial sites. Saqqara – the resting place of many high-ranking persons of the early dynasty – is one of the oldest and largest necropolises of Ancient Egypt.

Unfortunately, little is known about Anejib’s son, Prince Sabu. He did not succeed his father on the throne, but did receive an honorable burial at Saqqara. History has not preserved many details about the dynastic relationship in the First Dynasty, so we may never know about the fate of Sabu, his exact role at court or political events of that time. Emery writes that Sabu was probably a high-ranking official and administrator of the province both during the reign of Pharaoh Den (probably his grandfather) and his father Anejib.

The mastaba (tomb) of Prince Sabu was discovered at the very edge of a plateau in the northern part of Sakkara. It was located about 1.7 kilometers north of the legendary step pyramid of Djoser. Designated Tomb 3111, it was excavated by Emery on January 10, 1936.

The tomb consisted of seven burial chambers, each of which was strewn with various burial accessories. In the largest room was the body of Prince Sabu, which was accompanied by many funerary items. Most of them were not unusual – animal bones, flint tools, clay vessels, ivory products, stone bowls. But one thing stood out from the others: Emery discovered an amazing disk, broken into many pieces.

After painstaking assembly, Sabu’s disc intrigued many leading Egyptologists. The disc-shaped object resembles a round-bottomed bowl and has three extremely finely carved, curved lobes at approximately 120-degree intervals around the periphery of the bowl. These blades are separated from the rim by three biconvex holes.

In the center of the disc is a thin tube about 10 centimeters in diameter. The item is crafted from metasyltstone, otherwise referred to as slate. It is a porous, brittle rock that would be very difficult to carve – especially in such fine details.

Shale consists of large grains and is characterized by elongated minerals in pronounced layers. It is prone to flaking during processing and is easily crushed when exposed to tools. So, we have the first riddle: how was the disc cut in such small details? 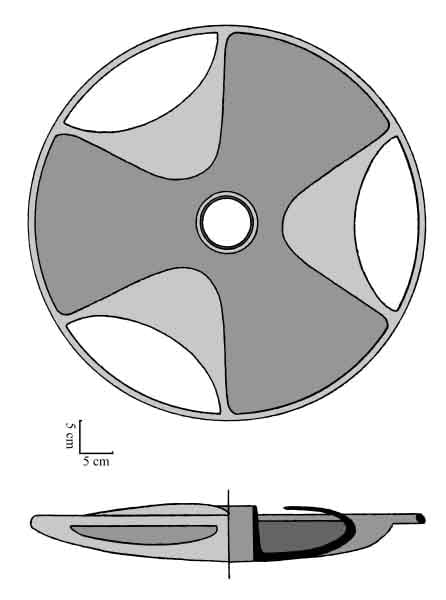 In asking this question, we must take into account the age of the disc. The tomb of Prince Sabu dates back to about 3,000 BC, so the disc is at least 5,000 years old! It is believed that the tools used in those days were made of stone and copper, which would make delicate work quite difficult, if not impossible, especially on a material as fragile as shale. For some reason, Sabu’s disc seems out of place in the tomb of the nobility of the First Dynasty.

The next riddle is the purpose of this object. Over the years, many interesting theories have emerged. Almost immediately after its discovery, the disc was “discarded” as a “vase” or “incense burner”, or simply a trivial decorative or ceremonial object. But many believe that this is far, very far from the truth. One look and basic knowledge of mechanics and engineering give a completely different interpretation – this disc can be part of a mechanism.

One resourceful amateur historian may have solved this mystery. Armed with a 3D printer, the man created an exact replica of Sabu’s disk in an attempt to prove his own theory: the disk was an ancient “impeller”, part of a centrifugal pump. When the disc was placed in a housing and driven at high speed through a small shaft in its center, it expelled water extremely effectively.

Moreover, when the disc was driven without a housing to direct the displaced water, it created a powerful vortex. Observing these recorded experiments allows one to understand one thing: the bizarrely curved blades and slightly concave shape of the disc were created for a reason. Intricately carved details, the disc is capable of pumping water with ease and appears to be a critical component of the water pump mechanism.

One fact supports this theory: Ancient Egypt depended on irrigation. Later in their history, they improved water management through basin irrigation, a process that allowed them to control the rise and fall of a river. Thus, they managed to get the maximum yield and increase their agricultural potential. So why should it be strange to believe that they were trying to create an improved design that would help them irrigate the land quickly and efficiently?

An even older clay object dating from the pre-dynastic period of Nakada II (3650 – 3300 BC), strangely similar to the disc of Sabu. This piece depicts three “snakes” jumping upwards from the center of the disc, which is very similar to the Sabu disc, with a central shaft and three biconvex holes. Could this clay object represent three streams of water escaping from a disk? This seems very likely.

Proof of the existence of ancient astronauts?

But shale does not seem to be a strong enough material for a pumping mechanism. This suggests something else: weren’t the masters of the First Dynasty of Egypt trying to recreate an older object using the tools and materials available to them, an object that they might not fully understand?

Many theories suggest that Sabu’s disc is simply a slate stone replica of the original item made of metal. There is even an assumption that this item was discovered among the remains of an older, more advanced civilization that predates the earliest history of Ancient Egypt.

The renowned Swiss writer Erich von Denniken is one of the leading proponents of the theory that aliens or higher, advanced civilizations influenced early humans. He suggests that Sabu’s disk was an Egyptian stone replica of an extraterrestrial ship’s hyperdrive internal component, or, more simply, a stone model of a flying saucer. Others have compared the wheel to the improved alloy flywheels that were developed in the 1970s by engineers at the Lockheed rocket company, and there are indeed similarities.

However, some suggest a much simpler disk role. They claim that three blades were used to hold threads of silk or rope: as the disc rotated, it intertwined three threads into one, creating twine and thicker ropes. This theory is often dismissed as being too straightforward: the Egyptians would not have gone to such extremes and created a disc just to weave fibers when other methods were available early enough.

There are other theories, some more extreme than others. One French author suggests that the Sabu disc is just one of many that were an integral part of the early “factory”. This complex theory explains how the ancient Egyptians produced sodium carbonate inside the pyramids using advanced systems and technologies.

As you can see, many of the proposals simply fall into the realm of the impossible and seem to be more based on wish fulfillment than sound archeology. Ancient hyperdrives, factory complexes, steering wheels, and other unlikely assumptions are simply impossible to prove.

Surely more than a vase

On the other hand, mainstream science has a suspicious tendency to reject any suggestion that the disc is part of a mechanism. Mainstream archeology considers the disc to be an incense burner, or, frankly, a vase.

If we resort to such extreme measures in order to polish and give a complex shape to an ultra-delicate slate stone, then it is unlikely at first glance to simply create a “vase”. Even the process used to create the disc is difficult to explain given its age. But if we accept the fact that this is something that the artisans of the First Dynasty could create with the tools at their disposal, the question remains: for what purpose? It seems clear that Sabu’s drive was part of something complex.

Walter Brian Emery noted his find in his book Great Tombs of the First Dynasty, simply calling it a “slate bowl-shaped vessel.” He later referred to it again in his work “Archaic Egypt”, where he described it as “rocking” – a trinket.

However, some sources indicate that he was well aware of the problem she presented in scientific circles, where she was described as “a small hole that threatens to become an abyss into which all official Egyptology will fall.” Perhaps this is the reason why Sabu’s disk is often overlooked in the scientific literature. In fact, very little is known about Prince Sabu, his tomb and the unusual disc.