(ORDO NEWS) — There are many genes, or at least markers of one sort or another within our DNA sequences, that have been associated with height. By some estimates the number could be thousands. However, finding those select genes that have a readily apparent and significant function in height has proven difficult.

One exciting new gene, at least for Chinese horses, was just described in the current issue of Current Biology. The researchers found that a transcription factor known as TBX3 plays a critical role in driving body size differences between Chinese ponies and horses.

TBX3 is one of perhaps two dozen proteins in our own genomes that all share a highly conserved DNA binding domain known as a T-box. This domain is a big part of the protein and consists of several hundred amino acids that are typically coded over many exons.

The DNA sequence bound by the T-box domain is also, conveniently I suppose, known in the literature as a T-box. The canonical sequence and overall reported length estimates of the the T-box element also come with a lot of variance. Some reports have it nailed at a length of 200 nucleotides, while others offer a shorter, and partly palindromic consensus sequence of “TCACACCT.”

Clearly, the TBX field is poised at the bleeding edge of genetic discovery— still sorting itself out as the last mysterious undefined DNA sequences are fully explored. Although the first T-box protein, TBX1 (then called Brachyury since its disruption would cause a shortened tail), was discovered back in the 1920s, no one seems to know exactly how many T-box elements exist in our DNA, and in which critical promoter or enhancer regions they might be readied for action.

Confusingly, it seems that the all-caps format TBX is called for when describing the protein, while the Tbx format refers to the gene; and yet, one still often finds well-meaning conglomerations like “TBX gene” or “Tbx protein” in the larger online literature.

The encoded proteins of Tbx5 and Tbx4 figure significantly in limb development, primarily during limb bud initiation. In chickens, Tbx4 specifies hindlimb status while Tbx5 specifies forelimb status. The activation of these proteins by Hox genes kicks off a signaling cascade involving the Wnt and FGF pathways in the limb buds. Tbx4 and Tbx5 lead to the development of apical ectodermal ridge and zone of polarizing activity.

Although TBX3 controls the anterior/posterior axis during growth, its overall contribution to human height remains to be fully explored. Long forelimbs obviously increase the apparent size of horses, but only the hindlimbs contribute to height in humans.

A true explanation of height through heritable genes might be something of an acid test for the state of the entire field of genetics. If we still lack a method capable of genetically defining something as tangible and unambiguous as height, then surely, any current explanations of far more complex traits, like autism or schizophrenia, are little more than bunk.

The main problem is that typical GWAS-style genomics studies simply provide names of genes as outputs—they don’t themselves actually explain anything. That is why they can’t actually predict anything in the real world that exists outside of the carefully selected data that powered the study in the first place.

The further crafty application of additional statistical methods and network analysis can often give readers, and likely the authors as well, the illusion of understanding; however, in reality, they are just pretty ways to display already existing knowledge.

For example, so-called SNOW methods (studying networks in the omics world) can build protein–protein contact networks and map lists of genes or proteins over a reference interactome, where nodes are proteins and edges are interaction events.

SNOW interactomes are essentially minimally connected networks, in this case, height‐associated genes, generated from data sources like the human protein reference database, ntAct and BIND. However, the best that most currently employed statistical methods can offer are simplistic statements like, “Gene X can explain 5% of the observed variability.”

As mentioned, statements of this form are not explanations, they simply purport to tell you that some gene name is an explanation of something in some statistical fairyland. 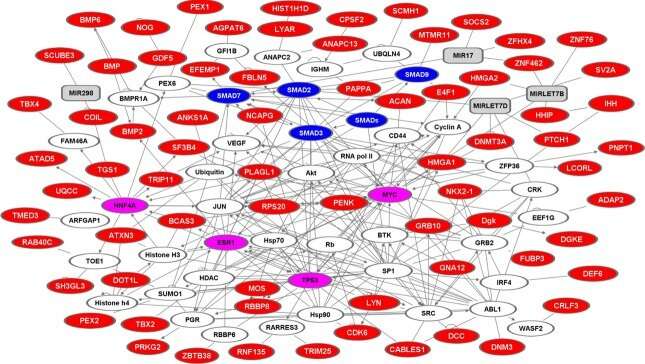 The main issue with just putting gene names into boxes and drawing lines between them is that it ignores obvious hierarchical structure in the way gene networks really work. Real gene networks are more a combination of a hierarchical tree (where links are only drawn directly between parent and child) and an “anything-goes” open network.

At the bottom level, one would put the end effectors that directly compose the collagens, phosphates and deposition of calcium in cartilaginous and bony regions of growth. The next level up would include the kinases/phosphatases and other secondary structure modifiers that activate, deactivate or localize the end effectors by changing their composition and structure.

Regulating both these middle-level modifiers, as well as the end-effector genes, are the upper echelon proteins that do their bidding in the nucleus, namely the epigenetics modifiers and transcription factors like TBX3.

Like many other transcription factors, it can be tough to nail down all the places where TBX3 is active and what it does in those places. For example, the role of TBX3 expression in the hypothalamus, where it may contribute to global body-wide signaling, might be expected to differ from its more localized efforts within the forelimb.

As the exploration of other key molecules in other well-characterized friends like the recently discovered functions of IGF1 in the domestication of small dogs, continues apace, a clearer understanding of height will be in hand.