(ORDO NEWS) — Dark matter, a hypothetical material that does not absorb, emit or reflect light, is thought to account for over 80 percent of the matter in the universe. While many studies have indirectly hinted at its existence, so far, physicists have been unable to directly detect dark matter and thus to confidently determine what it consists of.

One factor that makes searching for dark matter particularly challenging is that very little is known about its possible mass and composition. This means that dark matter searches are based on great part on hypotheses and theoretical assumptions.

Researchers at SLAC National Accelerator Laboratory and Université Paris Saclay have recently carried out a theoretical study that could introduce a new way of searching for dark matter. Their paper, published in Physical Review Letters, shows that when macroscopic dark matter travels through a star, it could produce shock waves that might reach the star’s surface. These waves could in turn lead to distinctive and transient optical, UV and X-ray emissions that might be detectable by sophisticated telescopes.

“Most experiments have searched for dark matter made of separate particles, each about as heavy as an atomic nucleus, or clumps about as massive as planets or stars,” Kevin Zhou, one of the researchers who carried out the study. “We were interested in the intermediate case of asteroid-sized dark matter, which had been thought to be hard to test experimentally, since dark asteroids would be too rare to impact Earth, but too small to see in space.”

Initially, Zhou and his colleagues started exploring the possibility that the heat produced during the impact between a dark matter asteroid and an ordinary star could result in the star exploding. This hypothesis was based on past studies suggesting that energy deposition can sometimes trigger supernova in white dwarfs.

After a few weeks of calculations and discussions, however, the team realized that the impact between a dark matter asteroid and an ordinary star would most likely not lead to an explosion, as ordinary stars are more stable than white dwarfs.

“We had a hunch that the energy produced by such a collision should be visible somehow, so we brainstormed for a few months, trying and tossing out idea after idea,” Zhou explained. “Finally, we realized that the shock waves generated by the dark asteroid’s travel through the star were the most promising signature.” 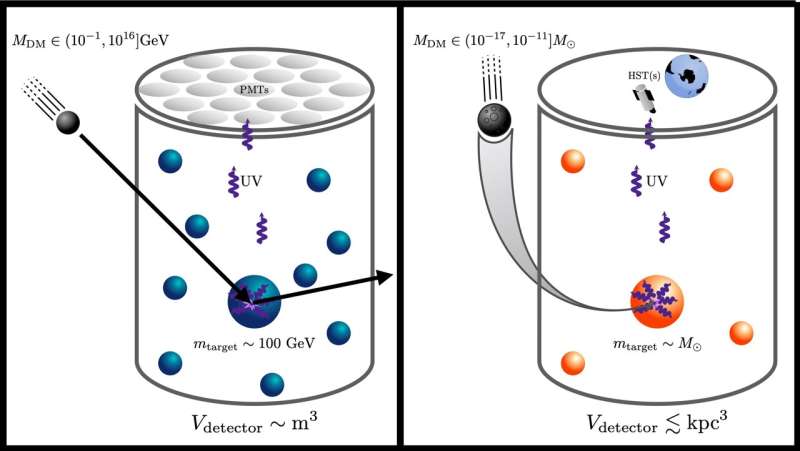 Shock waves are sharp signals that are produced when an object is moving faster than the speed of sound. For instance, a supersonic aircraft produces a sonic boom, which can be heard from the Earth’s surface even when it is flying miles above it.

Similarly, Zhou and his colleagues predicted that the shock waves produced by dark asteroids deep inside a star could reach a star’s surface. This would in turn result in a short-lived hot spot that could be detected using telescopes that can examine the UV spectrum.

“We’re excited that we identified a powerful new way to search for a kind of dark matter thought to be hard to test, using telescopes that we already have in an unexpected way,” Zhou said. “The most powerful UV telescope is the Hubble space telescope, but since stellar shock events are transients, it helps to be able to monitor more of the sky at once.”

The recent study follows a growing trend within the astrophysics community to use astronomical objects as enormous dark matter detectors. This promising approach to searching for dark matter unites the fields of particle physics and astrophysics, bringing these two communities closer together.

In the future, the recent work by this team of researchers could inspire engineers to build new and smaller UV telescopes that can observe wider parts of the universe. A similar telescope, dubbed ULTRASAT, is already set to be released in 2024. Using this telescope, physicists could try searching for dark matter by examining stellar surfaces. In their next works, the researchers themselves plan to try to detect potential dark asteroid impact events using UV telescope data.

“The ideal case would be to use the Hubble space telescope to monitor a large globular cluster in the UV,” Zhou said. “It would also be interesting to consider dark asteroids impacting other astronomical objects. Since our work, there have been papers by others considering impacts on neutron stars and red giants, but there are probably even more promising ideas in this direction that nobody has thought of yet.”

Interceptor satellite will wait for guests from distant stars

Interceptor satellite will wait for guests from distant stars