(ORDO NEWS) —  A Long March 8 rocket has arrived at the coastal Wenchang spaceport for the second mission of what is planned to be China’s first reusable launch vehicle.

The Long March 8 will launch in late February or early March and will be carrying 22 satellites for Chinese commercial space companies, including optical and radar Earth observation satellites.

The rocket’s maker, the China Aerospace Science and Technology Corporation (CASC), a giant state-owned company, earlier stated it would convert the Long March 8 into a rocket capable of making vertical landings like SpaceX’s Falcon 9 rockets do, restarting the engines of the first stage to help it softly touch down.

There is no indication, however, if the upcoming launch will include tests related to landing and recovering the rocket’s first stage and boosters.

The new rocket arrived at the Wenchang Space Launch Center on Jan. 21 after a week at sea. The rocket was manufactured in Tianjin before being shipped to Hainan island in the South China Sea.

The China Great Wall Industry Corporation (CGWIC), a CASC company which arranges launch contracts, has said that the mission will be the second of its “Long March Express” rideshare missions for commercial payloads. 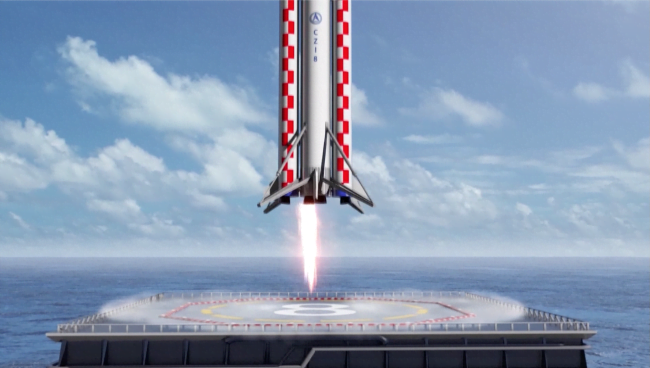 The first Long March Express mission launched in April 2021, and CGWIC says another is planned for later in 2022.

The 165-foot (50.3 meters) high Long March 8 has two stages and two side boosters. It is designed to launch around 4.5 tons of cargo to a sun-synchronous orbit with an altitude of 435 miles (700 kilometers), filling a gap in current Chinese launch capabilities.

The first flight of the Long March 8 took place in December 2020, successfully placing five satellites in orbit. That launch was expendable, meaning the spent rocket stages and boosters fell freely to the Earth.

To land, the first stage engines will need to restart after its main job of sending the second stage and payload towards space, to guide the rocket back towards a landing area. The engines will also need to start up again for a powered descent and soft landing.

SpaceX’s Falcon 9 first stage has nine engines, with three firing up again to make a powered descent and gentle landing. The Long March 8 first stage however has only two YF-100 rocket engines (which burn liquid kerosene and liquid oxygen), meaning both first stage engines must be used during landings.

Therefore a greater amount of control is needed over the thrust they produce for a safe, controlled landing. For that reason, CASC has said it will keep the two side boosters attached to the rocket’s first stage to act as ballast, meaning the engines won’t need to throttle down quite as much when the rocket returns to Earth.

It is unknown if CASC has been conducting trials of landings. The group also stated its target for reusability was 2025, meaning it may be too early to see tests with this launch.

SpaceX took a number of orbital launch attempts to master landings back at the pad and at sea.

CASC also revealed on social media that it will also launch another Long March 8, this time without its two boosters, from Wenchang during the first quarter of the year.