(ORDO NEWS) — The marsupial wolf, or thylacine, was a large predator that until recently lived in Australia and neighboring islands.

The arrival of Europeans led to a sharp reduction in its numbers, and the last thylacine died in 1936. Now, however, a new lab has been set up in Australia to use the power of genetics and cell technology to revive an extinct species.

Due to many millions of years of isolation, Australia and its neighboring islands acquired a peculiar fauna, including primitive mammals: monotremes like the platypus and many marsupials.

Unlike real animals, they do not have a placenta and either lay eggs or give birth to very small and underdeveloped cubs, which then grow in a pouch on the mother’s stomach.

The advent of Europeans, along with mass hunting, agriculture and domestic animals, led to the rapid extinction of a number of Australian mammals and birds, such as the parakeet of paradise and several bandicoots . The marsupial wolf ( Thylacine cynocephalus ) lasted longer than others.

It was a predator, shaped like a dog: a lean body up to 1.3 meters in length, not counting the stiff half-meter tail. The back was covered with straight black and white stripes, hence its second name – the Tasmanian tiger.

Thylacines were characterized by sexual dimorphism: males were larger than females and weighed more than 20 kilograms with a height of 60 centimeters at the withers.

The predator had unique features associated with the isolated evolution of marsupials. The mouth of the thylacine opened at an angle of up to 90 degrees, and not only females, but also males, who “carried” their own genitals in it, had the notorious bags.

On the black-and-white frames of the old newsreel, we can clearly see the last of the marsupial wolves: the animals look unusual and their habits do not resemble modern animals.

Thylacines were the largest carnivores in Australia, New Guinea and Tasmania until the white man, his pets and (not least) their diseases reduced their numbers. The last known member of this species died at the Hubbard Zoo (Tasmania) in 1936.

It is unlikely that since then the situation with biodiversity has become much better: the reduction of habitats or even extinction still threatens many animals, including Australians and marsupials.

Therefore, scientists are trying to use bioengineering and reproductive technologies to save endangered species – or even revive extinct ones.

So, biologists from the University of Melbourne (Australia), who have long studied thylacines and dreamed of seeing them with their own eyes someday, received a generous donation of five million dollars.

The scientist admits that he really likes the film “Jurassic Park”: he and his colleagues are guided by the principle of “turning science fiction into scientific reality.”

However, their motivation is not curiosity, but the need to save many mammals, which are still threatened with extinction. Moreover, by restoring Australia’s natural communities, biologists hope to combat the many invasive species that have become a real disaster for the continent.

So, scientists decided to arrange a “reverse extinction” for the marsupial wolf (in English – de-extinction). To do this, in the next ten years, they plan to use gene editing technologies and, using preserved DNA samples, turn the cells of the narrow-legged marsupial mouse ( Sminthopsis sp. ) into thylacine cells.

Oddly enough, it was this small animal that turned out to be the closest living relative of the predator.

These cells should then be used to create a thylacine embryo and place it in the body of a female of some large marsupial, such as the spotted marsupial marten ( Dasyurus sp .).

Then get the cub out of her bag and raise a mature marsupial wolf. After that, repeat the procedure many times and get a population that can survive in the wild.

There is no doubt. What these scientists propose is really feasible. Another thing is not entirely clear: what exactly can they get? There can be no talk of real thylacine in its pure form.

However, Professor Pask is not embarrassed by the prospect that his thylacine will have a certain admixture of a narrow-legged marsupial mouse: “I don’t know if he will be a marsupial wolf at 99 percent, 99.99 percent and 78 percent. We will definitely be able to create something.” 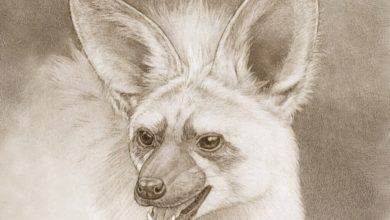 Ancestor of the earthen wolf lived in China