(ORDO NEWS) — Earth is closer to the Milky Way’s central supermassive black hole than scientists thought. Fortunately, this does not threaten humanity with anything other than a better understanding of the universe.

Measuring distances to distant celestial bodies is difficult, but necessary. After all, this is the only way astronomers can understand what they are dealing with: with a dim but close object (like a light bulb in a room) or with a very bright but distant object (like the North Star). And our ideas about what this luminary is and how the surrounding world generally works depends on this.

The most reliable way to measure distances in astronomy is the parallax method. Vesti.Ru told in detail what its essence was. Let us briefly recall that the direction to a distant celestial body (and hence the point in the sky in which we see it) depends on where the Earth is located in its orbit. To the observer, it looks as if the object moves slightly across the sky throughout the year. The closer the observed celestial body, the greater this displacement. By measuring it, you can calculate the distance to the object.

However, it is impossible to notice this effect with the naked eye. To fix it, you need very accurate observations. In visible light, they are engaged, for example, by the Gaia space telescope, which is making a three-dimensional map of the galaxy. And in the radio range, interferometers come to the rescue.

Let us recall what it is. If we combine several radio telescopes at a distance L from each other into a single system, then its ability to distinguish fine details will be comparable to a huge antenna with a diameter L. Radio astronomers often use this opportunity to study a variety of objects in the Universe. For example, it was in this way that the first image of a black hole was obtained.

There are several projects in which interferometers are used to measure distances using the parallax method. Among them is the Japanese project VERA.

Astronomers of the Land of the Rising Sun have combined several telescopes scattered across the Japanese archipelago into one network. The result is a system equivalent to an antenna with a diameter of 2,300 kilometers. If it were an optical telescope, it could be used to make out a coin in the lunar crater.

Within the framework of the VERA project, scientists have observed 99 space masers – natural radio lasers for 15 years. Having measured their apparent displacements in the sky, experts calculated the distances to them. Now these objects can serve as a kind of reference points for compiling a new map of the Milky Way. 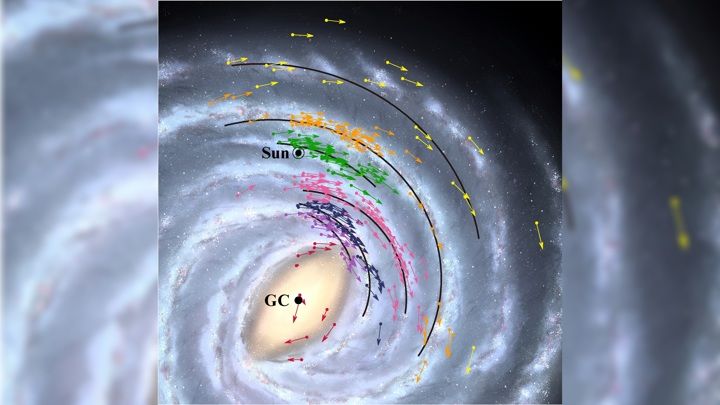 Masers are shown as colored dots with arrows indicating the direction of travel. The arms of the Galaxy are shown with black arcs. Masers belonging to the same arm are painted in the same color. GC is the center of the Galaxy.

Based on these results and data from previous studies, Japanese astronomers recently re-calculated the distance from the Earth to the galactic center.

It turned out that the center of our “star island” (and hence the supermassive black hole located there) is located at a distance of 25,800 light years from Earth. This is 2,000 light years less than previously thought.

It is worth clarifying that the Milky Way revolves around its center not at all because there is a supermassive black hole there. The gravity of a black hole with a mass of “only” four million suns cannot in any way control the motion of a galaxy with a mass of hundreds of billions of suns. On the contrary, this black hole dances to the tune of the Milky Way: it appeared in its center, because there the density of matter is the highest. Accordingly, the Sun is dragged along its path by the total attraction of the entire Galaxy. Only the stars closest to it revolve around the black hole proper.

So, as a result of new measurements, the Earth “became closer” to a huge black hole. What does this fact mean for humanity?

As they say, the beloved city can sleep peacefully. The distance to the “predator” is still too great for its activity to threaten humanity with something. But for astronomers, this is very valuable information. By specifying the distance to the black hole, they can more accurately measure the energy of flares and other processes occurring on it. This means that it will be easier for scientists to penetrate the secrets of this amazing object.

The VERA maser catalog is described in a scientific article published in the journal Publications of the Astronomical Society of Japan.