(ORDO NEWS) — Spanish oceanologists told how the unusual Antarctic sponge Stylocordyla chupachups works, how they managed to find it and why they named this species after the famous lollipop.

Sponges are one of the most ancient and primitive multicellular creatures on Earth. They are arranged so simply that zoologists do not consider them animals in the full sense of the word. Indeed, the sponge has neither organs nor real tissues. But there is a body attached to the bottom, which is permeated with pores and channels. Through them, the sponge pumps water along with an organic suspension, which it feeds on.

There are a lot of sponges on Earth (primarily in the ocean), they are quite different and are especially numerous in cold seas – say, off the coast of Antarctica. They account for approximately 75% of the biomass of the bottom communities of the Antarctic seas. Among sponges Stylocordyla chupachups is also found here .

The first sample of this curious sponge fell into the hands of Spanish researchers back in 2010. Josep Maria Gili of the Institute of Marine Research (Institut de Ciències del Mar) in Barcelona recalls : “At first we thought it was another species, widespread in Antarctic waters, Stylocordyla borealis . But then it turned out that no one had described this sponge before us.”

According to the oceanologist, they gave S. chupachups such a name because of the resemblance to the famous caramel. Thus, scientists expressed their gratitude to their children for the opportunity to do what they love – the study of the ocean. Sometimes, because of work, oceanologists have to leave their relatives for a long time.

Scientists realized that they were dealing with a new species only upon returning to Barcelona, ​​when they began to study the brought samples. This case confirms the hypothesis of oceanologists, according to which many Antarctic species are endemic, that is, they are found nowhere else. 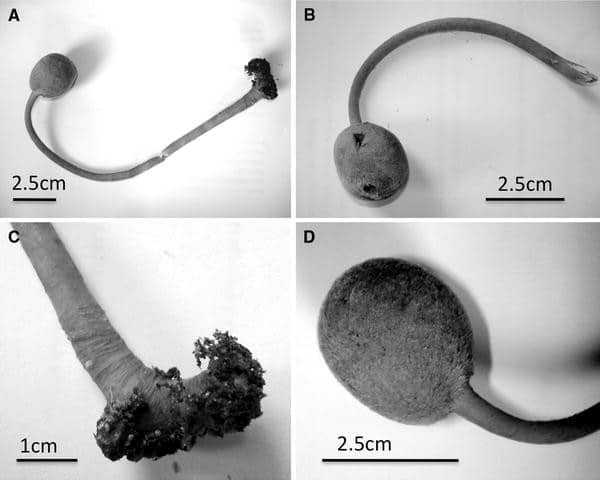 Most Antarctic sponges live at depths of 100 to 200 meters, where their aggregations extend for hundreds of meters. Stylocordyla chupachups prefers flat or sloping bottom areas 150-300 meters from the water surface.

Like other Antarctic sponges, Stylocordyla has long tufts of flint needles ( spicules ). Usually they do not play a special role in the life of a sponge, but Stylocordyla is special in this respect. Its bundle of spicules forms a thick stem, thanks to which it rises above the ground and captures food more successfully than sponges attached directly to the bottom.

The skeleton of Stylocordyla and many sponges of the same taxonomic group is formed from silicon, which they absorb from the environment.

At the same time, other sponges can have both a carbonate and an exclusively organic skeleton. However, in the case of Stylocordyla , the silicon skeleton becomes “too much” and protrudes outwards in the form of a thick stalk.

“We are dealing with an ongoing experiment in evolution, <…> one day it may turn into another great invention of nature,” Gili’s colleague, well-known ecologist Ramon Margalef, said about the spicules of Antarctic sponges.