(ORDO NEWS) — The remains of a biblical breakfast have been discovered in the Levant, where archaeologists found eight ostrich eggs next to a fire pit used by desert nomads in ancient times.

Giant ostrich egg fragments dating from 4,000 to 7,500 years ago have been found during excavations at the Nitzan sand dunes in Israel‘s Negev desert.

“We have found a camp site that is about 200 square meters in size and has been used by desert nomads since prehistoric times,” said Lauren Davis, director of excavations at the Israel Antiquities Authority.

“At the excavation site, we found burnt stones, flint and stone tools, and pottery shards, but this collection of ostrich eggs is a truly special find.”

This whole situation suggests that ostriches were common in the region until they became extinct in the 19th century.

Considering that one of their eggs contains about 25 times the nutritional value of a hen’s egg, it’s no surprise that ancient travelers sought them out as a food source. 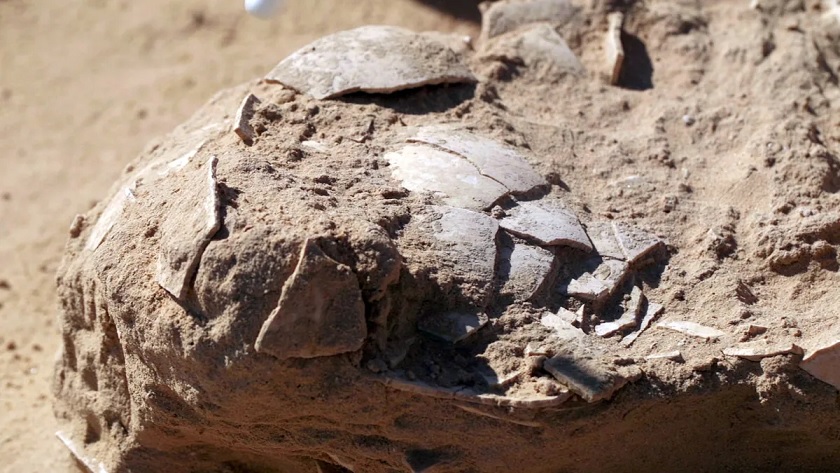 “The proximity of the group of eggs to the fire pit indicates that this is not a natural chance find, but a deliberate collection of eggs,” Davies said.

“One of the eggs was found right in the fire, which reinforces the understanding that they were used here as food.”

Interestingly, the bones of the ostrich were not found during archaeological excavations in this region. This means that the ancient travelers probably did not try to take down a huge bird, but they were content with their huge buttocks.

“Although the nomads did not build permanent structures at this site, the finds allow us to feel their presence in the desert,” Davis said.

Although the eggs were crushed, they are described as exceptionally preserved. It is likely that the campsite where they prepared was covered with desert sands.

And thousands of years later, with the movement of the dunes, they were discovered by archaeologists.

The protection provided by this ever-changing layer of sand has allowed the eggs to remain pristine for several millennia, Davis said.

Now the researchers plan to reconstruct the eggs. In doing so, they hope to learn more about what species of ostrich deposited them and how they were used.