(ORDO NEWS) — A researcher from Russia has discovered the mechanism of “molecular switching” of DNA, which changes our understanding of one of the main paradigms of biology.

For more than 70 years, it was believed that DNA stores and processes information through the structure of a double helix – uniquely corresponding to each other (complementary) molecular chains.

Maxim Nikitin, Head of the Nanobiomedicine Department at Sirius University and Head of the MIPT Laboratory, experimentally proved that DNA does not have to form a double helix to efficiently process genetic information.

DNA can store and transmit information due to weak affinity interactions, which is realized when the molecules have a low affinity for each other.

Moreover, he showed that short DNA, even the most non-complementary to a gene, can regulate its work.

An discovered fundamental phenomenon can be the key to understanding the nature of a wide variety of processes: from the unsolved mysteries of genetics, complex diseases, instant memory and aging to questions of the origin of life on Earth and its evolution.

In addition, it will qualitatively improve the specificity of gene therapy and the safety of DNA/RNA vaccines by identifying and reducing adverse reactions to drugs during treatment.

For the past 70 years, biologists’ understanding of the storage and transmission of information has been based on Watson and Crick’s ingenious discovery of the structure of DNA: “A DNA molecule has two helical strands that are connected by base pairs adenine-thymine or guanine-cytosine.”

The formulated law of “complementarity” on the strict specificity of pairs of nitrogenous bases (“building blocks” of the DNA structure) during the formation of the “double helix” has become a fundamental principle in the basis of the mechanisms of information transfer in DNA and the processes of controlling the work of genes.

The elegant model of the double helix perfectly demonstrated the possibility of restoring one chain at the expense of another and explained the molecular essence of the processes of transmission of hereditary information.

Maxim Nikitin, head of the Nanobiomedicine department at Sirius University, head of the MIPT laboratory, presented experimental evidence that DNA is quite capable of effectively storing and transmitting information even without complementarity of the chains of the famous double helix.

The sole author of the article (which is extremely rare in such reputable journals), Nikitin discovered a natural phenomenon that he called “molecular switching”.

Molecular switching consists in the transfer of information during the interaction of relatively short single-stranded DNA/RNA molecules (oligonucleotides) or other molecules.

Maxim Nikitin noted that in a mixture consisting of short single-stranded oligonucleotides that are not complementary to each other, their most diverse complexes will coexist simultaneously.

The variants of these interactions are determined by the “affinity” of the molecules and are generally described by the law of mass action, discovered back in the 19th century, on the dependence of the reaction rate on the concentration of the participating substances.

In this case, such complexes will be associated with each other and will transfer information between themselves, even if some two oligonucleotides do not directly bind to each other.

For example, in the simplest system of three oligonucleotides X, A and B: if A and B do not interact with each other, they can still transfer information to each other through an intermediary – the “switch” X.

At the same time, it is enough for each of them to interact with X very weakly: an increase in the concentration of A will lead to an increase in the number of XA complexes, which will reduce the number of XB complexes, although A did not interact with B directly in any way. If the system contains a larger number of oligonucleotides, then a significant amount of information can be transmitted.

“I drew attention to an unusual property of DNA that went unnoticed for exactly 70 years – in the shadow of the beauty of the double helix.

Namely, the fact that for any single-stranded DNA (ssDNA) there is a great variety of other ssDNA with almost any predetermined affinity – a property that I called the “DNA affinity continuum,” Maxim Nikitin shares.

“For example, let’s take an oligonucleotide of 10 bases. Then the oligonucleotide that is completely complementary to it will have the maximum affinity strength – affinity.

If, however, we begin to gradually replace nitrogenous bases in the second oligonucleotide with arbitrary ones, then their affinity for the first one will decrease. At the same time, by sorting through all ssDNA variants of 10 letters, for each affinity we will get a set of variants, that is, a dense “affinity continuum”. 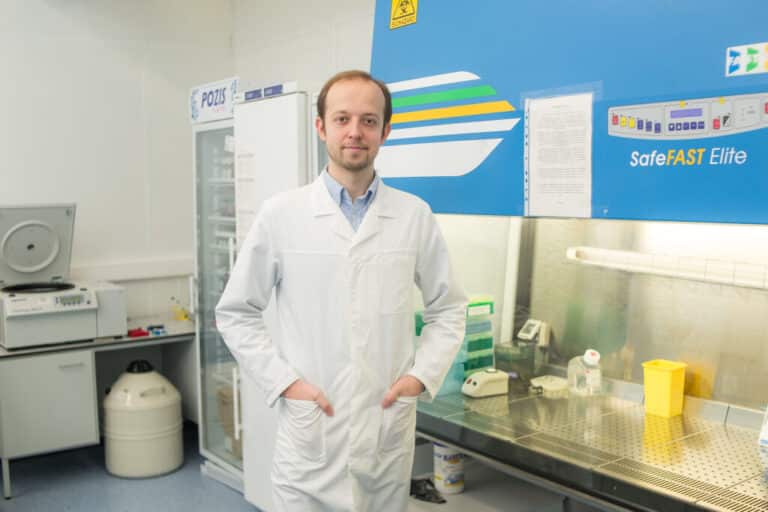 In order to prove that DNA can form sets of molecules with almost any predetermined mutual affinities, in his article Maxim Nikitin shows the experimental implementation of a wide variety of systems that process information in different ways, starting with systems that include only three supershort oligonucleotides with a length of seven nitrogenous bases, to memory cells, square root calculation systems, etc.

At the same time, computer simulation of the switching phenomenon demonstrated stable information processing by a system consisting of 1000 oligonucleotides. This makes it possible to create a 572-bit information processing cell, which exceeds the bit capacity of all existing electronic computers. Remarkably,

In addition, the phenomenon discovered by Nikitin allowed him to experimentally show another amazing fact that does not fit into the modern paradigm of molecular biology: any unstructured single-stranded DNA can specifically regulate the expression of a given gene, regardless of their mutual complementarity.

Everything depends on the presence of other oligonucleotides (also non-complementary) in the medium or organism.

Moreover, the author showed that molecular switching makes it possible to better control gene expression. If, within the framework of the standard paradigm, the complementary regulatory mechanism allows approximately 1012 variants of gene regulation (in this case, there are only 420 = 1012 different 20-nucleotide oligonucleotides), then Nikitin showed that using the same 20-nucleotide sequences, at least 10172 regulation variations can be realized. gene work.

This number greatly exceeds the number of elementary particles in the Universe, which are “only” 1080!

The discovered fundamental phenomenon of DNA chain switching is of great practical importance. Analysis of possible low-affinity interactions from the point of view of molecular switching can improve the specificity of gene therapy and the safety of DNA/RNA vaccines by identifying and reducing side (off-target) effects of administered drugs.

This requires the creation of a new generation of software that more accurately predicts the weak affinity interaction of nucleic acids, as well as analyzes their involvement in various natural processes, taking into account the mechanism of molecular switching.

Ultimately, all this will help minimize the risks of negative consequences of inappropriate editing of the patient’s genome and reduce the number of adverse events in the treatment process.

It should be noted that not only nucleic acids can participate in molecular switching. Proteins and small molecules can also interact according to this principle, just predicting their mutual affinities is currently, unfortunately, still very difficult.

But it is already clear that the demonstrated phenomenon of switching, being a fundamental and natural mechanism for the interaction of molecules with each other, can be the key to understanding the nature of a wide variety of processes: from the unsolved mysteries of genetics, complex diseases, instantaneous memory and aging to questions of the origin of life on Earth and her evolution.

All this opens up a vast field for interdisciplinary cooperation between scientists from completely different fields of knowledge.