US, WASHINGTON (ORDO NEWS) — Centaurs are celestial bodies located between the orbits of Jupiter and Neptune. They got this name because they represent a transitional class from asteroids to comets. Since their surface is rich in volatile substances, with a sufficient approximation to the Sun, any centaur would begin to show cometary activity.

Scientists are most interested in the trajectory of their movement – centaurs refuse to rotate in a stable orbit. When they pass a large planet, their orbits change due to the gravitational attraction of this planet. Some of them are shifted towards the intersection of the orbit of Jupiter, while others are ejected into the Oort cloud or into interstellar space due to too close proximity to one of the major planets.

Scientists have so far failed to build a clear model of the origin of centaurs due to the limited data on the physical parameters of these bodies. However, a new study by astrophysicists from CNRS (National Center for Scientific Research of France) and UNESP (São Paulo State University in Brazil) found that 19 centaurs probably arose near another star before being captured by the gravity of the Sun. 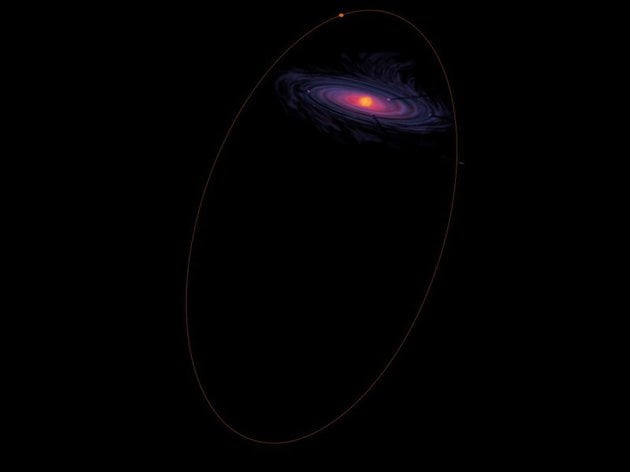 In 2018, astronomers discovered that an asteroid known as 2015 BZ509 (later called Ka’epaoka’awela) was born in a different star system before taking up a permanent residence near the orbit of Jupiter. Now the same team of researchers has discovered that another 19 objects are of similar origin.

About 4.5 billion years ago, the newborn Sun was surrounded by a disk of dust and gas, which gradually gathered in planets, satellites and other objects. Most asteroids and comets formed around the same time. Either from the remnants of the material, which was not enough for something more, or as a result of a collision of larger objects.

But the 19 asteroids mentioned in the study were not part of this disk. Modeling showed that at that time they revolved around the Sun, but perpendicular to this dust disk, and did it at a considerable distance.

At that time, according to astronomers, the Sun was part of a stellar cradle – a molecular cloud with a cluster of bodies born close to each other.

“The close proximity of the stars meant that in those early years they felt each other’s gravity much more strongly than today. This made it possible to transfer asteroids from one stellar system to another, ”- Fathi Namouni, co-author of the study.

“This population will give us a hint about the early birth of the Sun, about how the capture of interstellar asteroids took place, and about the role of interstellar matter in the chemical enrichment of the solar system and the formation of its evolution,” the study says.

The study was published in the journal MNRAS.

Astronomical calendar for May 2020

Sun has been erupting non-stop all month, and more giant flares are coming

Astronomical calendar for May 2020

Sun has been erupting non-stop all month, and more giant flares are coming