(ORDO NEWS) — The most massive and powerful magnet on the planet – the central solenoid – is finally ready. Well, or, at least, its first detail: after about 10 years of development and production, the module was delivered from the USA to the south of France, where the international experimental thermonuclear reactor (ITER) should start operating in 2023.

Creating such a colossal magnet is an experiment in itself. General Atomics engineers spent a lot of time designing, building and testing its components. But that’s half the battle: transporting huge and sensitive parts to the other hemisphere has become a separate technical challenge.

The move required the construction of new access roads and the use of a crane specially designed for handling critical cargo. All this is easy to understand if you imagine the scale and power of the new magnet.

“The force generated by the central solenoid will be enough to lift an aircraft carrier weighing 100,000 tons into the air ,” says General Atomics chief engineer John Smith. In August 2021, the first magnet module arrived in France.

There will be six such blocks in total, each 2.1 m high and 4.2 m wide, weighing 114 tons each. They will be mounted together, surrounding the fusion reactor with a magnetic field.

The central solenoid is the beating heart of the entire system, which uses 15 million amps of current to heat up and stabilize the plasma inside the tokamak. The experimental ITER will become a prototype for future industrial thermonuclear reactors, and it is not planned to receive energy from it for general networks.

The objective of the project is to demonstrate the operability of the tokamak and thermonuclear fusion as an already available technology for extracting clean and almost infinite energy. And the central solenoid will play a key role in this. But how is it even possible to build such a colossal magnet?

The basic principle here is the same as in ordinary electromagnets: a metal conductor is wound around the core, and current is applied to it. As a conductor for the central solenoid, niobium-tin is used, which, after processing, acquires superconducting properties.

At General Atomics, it is kept for five weeks at a certain temperature, then heated to 650 ° C, then cooled again. After that, the winding is loosened and, using an automatic installation, all 5.5 km of the wire are insulated.

Next, the coil is hermetically wrapped with a protective tape, poured into 4500 liters of epoxy resin and cured at 130 °C. Finally, the entire structure is placed in a cryogenic facility, lowering the temperature to -269 °C for testing.

So far, only the first of the central solenoid modules has passed all the steps. But with the other five, General Atomics will be able to operate according to the already proven pattern, working in parallel at different sites, so that the entire production cycle will take about two years.

Then the modules will also be transported to the French port of Saint-Pollet-Durance. Module-1 was shipped from the United States in July 2021 and arrived in France in early August. It was already transported to the ITER site in autumn.

Fortunately, this is not the first oversized cargo that the reactor builders are dealing with. It is connected to a port in the south of France by a specially prepared highway capable of taking on a particularly heavy load.

To work with the modules of the central solenoid, a special crane with increased lifting capacity is used, the creation of which has become a complex engineering task.

It is mounted on a nine-axle tractor, and the counterweights and other components necessary for operation are transported by about 50 separate trucks. And all this just to reload the module on the main tractor.

“I’m just blown away by this car, ” says Smith. “ It has one pull module and two push modules, two big diesel engines that drive it all. A separate person sits and controls the operation of the rear wheels only.

It’s amazing how easy and precise they are to maneuver.” From the tractor, the magnet is reloaded onto rail transport and only then arrives at the port, where it is received by a container ship. 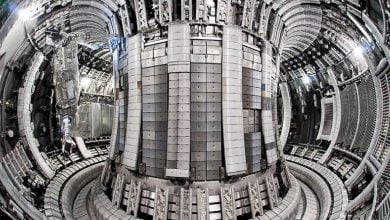