(ORDO NEWS) — The interior of the well-studied supernova Cassiopeia A is expanding outward unevenly. This fact was able to establish a group of astronomers from Amsterdam and Harvard universities. Researchers suspect that the cause of unevenness is a collision with a space object.

Cassiopeia A is the remnants of an exploded star located in the direction of the constellation Cassiopeia, about 11,000 light-years away. The light from this explosion should have first reached the Earth around 1670.

However, there was too much gas and dust in the vicinity of this star to see it with the naked eye or with the help of the most primitive telescopes that appeared in that distant era.

Researchers led by Jakob Vink of the University of Amsterdam in the Netherlands analyzed a 19-year archive of observations from NASA’s Chandra X-ray space observatory. On the west side of the Cassiopeia A Nebula, scientists have observed that the inner regions of the nebula do not expand, but instead move towards the center.

According to the models built by Vinck and his colleagues, a collision scenario seems more likely. Models show that after a collision, the shock wave first slows down and then accelerates again. “That’s what we were able to measure,” Vinck added.

The impact scenario has also been studied recently by an Italian scientific team with which Vinck’s team worked closely. They suspect that the shock wave experienced a collision with a shell consisting of gas particles. This shell could have been formed by blowing out asymmetric gas flows by the then “living” star, the authors believe.

The Witch’s Head Nebula “screaming” at the supergiant star Rigel

The Witch’s Head Nebula “screaming” at the supergiant star Rigel 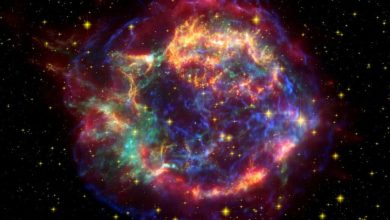 Omega a snapshot of the brightest nebula