(ORDO NEWS) — Ingenuity, which will soon become the first helicopter to take off in the atmosphere of another celestial body, has finally entered a completely independent phase of the mission. It finally separated from Perseverance, the rover rode away from it, and now the drone receives energy only from its own solar battery. He had already survived the harsh Martian night and sent in a picture from his own camera.

Appropriate achievements for a small experimental helicopter. Which does not detract from their importance, of course. Recall that Ingenuity is destined for the role of only a demonstrator of technologies, therefore, the requirements for its mission are primarily purely engineering ones and it does not carry scientific instruments on board. So a successful night on Mars is already a significant result. The helicopter is made with a wide variety of commercially available parts, so their resistance to low temperatures (down to minus 90 ° C) is not very impressive.

As the National Aeronautics and Space Administration (NASA) writes on its website, Ingenuity’s separation from the rover took place on April 3. Then, before the rover drove off, the helicopter’s automatics took the first picture with their camera. The image is in color, but to save the resources of the communication system, only a low-resolution version is still available.

Whether NASA will publish a full-size version of the photo, or it was captured only in this form, is not specified. This image is not included in the catalog of “raw” images of the Perseverance mission. In addition to the photos, the engineers received a telemetry kit from a helicopter. 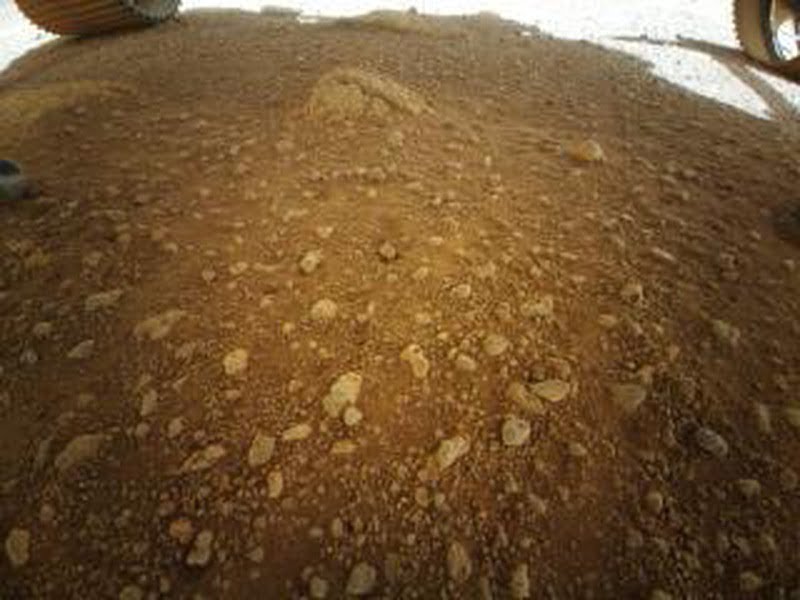 Its systems are working properly, the heaters are performing their function, and the electronics are in order. This means that Ingenuity had no problems at least on the first local day (sol). The next most important stage of the mission is to assess how efficiently the drone’s solar panel is performing. It is located above the propellers, and its area is very limited, so it does not have the same efficiency margin as the Spirit and Opportunity rovers. Not to mention the InSight landing platform, which, as a result of dust contamination, can significantly lose power relative to the initial indicators without seriously affecting the mission.

After landing on Mars on February 18, Ingenuity spent more than three weeks under the “belly” of the rover. Now he can only rely on his own strength – and this is a very difficult task. Its batteries are the usual Sony lithium “banks” available to anyone in online stores. And as a central processor, the Qualcomm Snapdragon 801 chip, which was widely used in smartphones, is used. This choice of “filling” is due to the simplicity of the mission objectives and the need to make the drone as cheap as possible. But such components are not frost-resistant, so their characteristics impose serious restrictions on the operation of the helicopter.

For example, up to 75% of the battery capacity is reserved for heating electronics and battery cells. From this it follows that Ingenuity can spend only a quarter of the available energy on flight. Therefore, the time spent in the air will be limited – a maximum of 90 seconds. The deadline for the test take-off is also quite tough: the helicopter is assigned 30 sols for this task. The minimum program is to rise in the thin atmosphere of Mars by at least a couple of meters. The ideal option is to sit down safely and then repeat the procedure a few days later.

The first tests of Ingenuity propellers will take place in the coming days. NASA’s Jet Propulsion Laboratory (JPL) engineers will send a command to the helicopter to spin the blades. The rotational speed will be insufficient to lift off the surface, but the efficiency of the mechanism can already be understood. The process will be monitored by Perseverance using their cameras. When the power supply system and the Ingenuity engine demonstrate functionality, the decisive operation will take place – the first controlled flight of the vehicle with the engine in the atmosphere of another celestial body. So far, April 11 has been set as the preliminary date, and we will receive data on the results of this experiment on Cosmonautics Day.

By 2025, the US military could deploy a robotic assassin force

By 2025, the US military could deploy a robotic assassin force