(ORDO NEWS) — In a new image taken by the Hubble Space Telescope, the dwarf galaxy NGC 1705 shines in a cloud of bright light and red clouds. The tiny irregular galaxy, located in the constellation Pictor at a distance of about 17 million light-years from Earth, has been called a “cosmic curiosity” by the European Space Agency.

Irregular dwarf galaxies like this one usually contain fewer elements than larger galaxies and are made up mostly of hydrogen and helium. Therefore, it is believed that they are similar to the earliest galaxies in the universe.

This image was taken using Hubble’s Wide Field Camera 3 to observe a specific wavelength of light known as H-alpha, the ESA said in a statement. With this wavelength, astronomers hoped to find regions where young, energetic stars illuminate clouds of gas around them with ultraviolet light.

The last time Hubble looked at NGC 1705 was in 1999, when astronomers used the telescope’s camera to look at the center of the galaxy. With these new observations, which use much newer Hubble technology, more detail and a better understanding of the galaxy can be obtained. 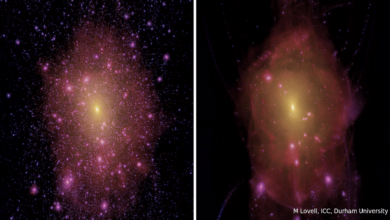