(ORDO NEWS) — Recently, there have been many rare astronomical phenomena. Indeed, hundreds of years will pass before we can again see Jupiter and Saturn so close to each other. However, there are even stranger and more rare phenomena that can be observed in the night sky. However, to get a good look at them, you will need access to the NASA Hubble Space Telescope.

As always, this amazing tool provides absolutely breathtaking images of distant galaxies, stars and planets. The picture in front of you shows one of the rarest astronomical phenomena – “Einstein’s ring”. It’s actually a distant galaxy curving through a cluster of galaxies. The reason for this phenomenon is a process called gravitational lensing. If a cosmic body, such as the Sun, were too massive,

What are Einstein’s rings?

Albert Einstein’s General Theory of Relativity (GTR), published in 1916, predicted that massive objects such as stars could bend rays of light passing nearby; the gravitational attraction of various objects in the Universe, in turn, occurs due to the fact that each object bends space.

Thus, the image of Einstein’s ring, taken in the spring of 2018, illustrates graceful elliptical galaxies and impressive spirals observed in various positions: edge to the plane of the visible galaxy or “face to face”, which the observer sees as magnificent spiral arms. In the photo below, you can see a monstrous collection of hundreds of galaxies held together by the iron grip of gravity. The mass of this cluster is large enough to severely distort spacetime around it, creating strange, winding curves that nearly surround the cluster’s center.

Interestingly, rings are created when light from distant objects, such as galaxies, passes an extremely large mass like this galaxy cluster. The Hubble image, published on the official NASA website, shows light from a galaxy that bends and distorts around a massive intermediate galaxy cluster, and therefore is forced to move along different light paths to Earth. This is why it seems that the galaxy is in several places at the same time.

At the end of December 2020, representatives of the NASA space agency said that light from galaxies in the center is bent in a curve that we see due to the gravity of the galaxy cluster lying in front of it. The close-to-perfect alignment of the background galaxies with the cluster’s central elliptical galaxy, shown in the center of the Hubble image, distorted and enlarged the image of the background galaxy into an almost perfect ring. Further distortions are caused by the gravity of other galaxies in the cluster.

Note that for the Hubble telescope, which is being prepared to replace the James Webb Space Telescope, observation of the Einstein ring or “molten ring” is a huge success. The snapshot of the ring called GAL-CLUS-022058s once again confirms the correctness of Albert Einstein’s hypothesis.

After the launch of the Hubble Space Telescope in 1993, the first Einstein ring was discovered in 1998. Since then, many have been discovered by radio infrared and optical telescopes.

Interestingly, astronomers observed one of the best examples of Einstein rings in 2007. The object was near the luminous Red Galaxy LRG 3-757. Because of its horseshoe shape, the photograph was unofficially called the cosmic horseshoe. 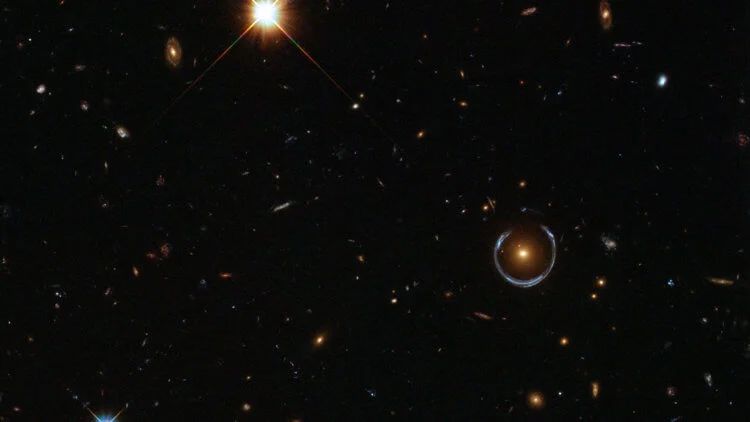 Blue light is also clearly visible in the image. The reason the rings may appear blue is still debated in the scientific community because the gravitational lensing equation does not technically explain this effect. It was previously thought that blue originated from blue star-forming galaxies. However, a study published in 2011 proposed a theory of the diffraction of light waves in a gravitational field generated by the scattering of very low frequency scalar waves in spacetime.

Scientists have created a patch for operations on internal organs

Scientists have created a patch for operations on internal organs