(ORDO NEWS) — This interesting image from the Mars Reconnaissance Orbiter (MRO)’s HiRISE camera shows a field of unusual dunes called sand dunes. These dunes formed along a rock in the Boreale Gorge, at the North Pole of Mars.

HIRISE is a powerful camera that produces images that show desk-sized objects from orbit. The image above shows an area less than 1 km across, and the orbiter was about 197 km above the surface of the Red Planet at the time of the image.

Scientists say barchan dunes are common on both Earth and Mars. These dunes usually have a very distinctive shape and are important because they can tell scientists about the environment in which they formed and the direction of the winds in a particular location.

Barchans form in sandy areas where the winds blow in the same direction. This forms a sand dune in the shape of a crescent. The sand arcs that form the sand dunes end in “horns” directed downwind as the sand is blown into the ridges and slopes. 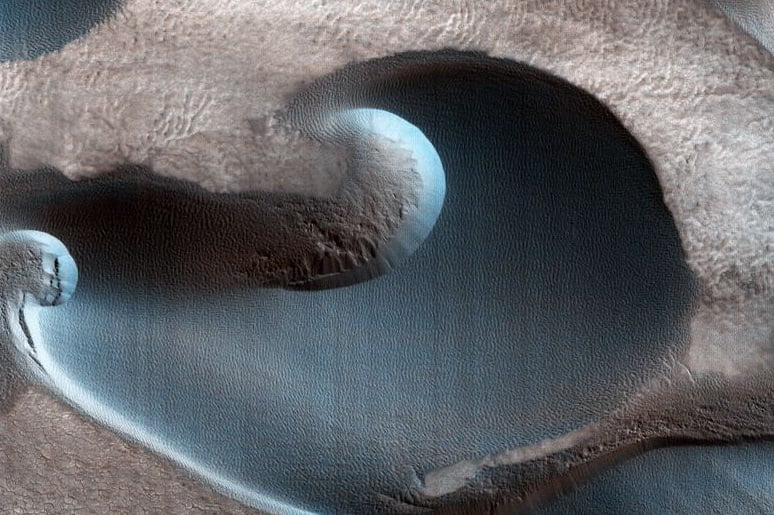 The winds at the North Pole of Mars must be blowing in different directions because the dunes shown above do not have the classic crescent shape. The image was taken using a red-green-blue filter on the camera, giving the sand a blue appearance.

The HiRISE camera operates in the visible wavelength range, the same as that of the human eye, but with a telescopic lens, making it one of the highest resolution cameras in space.

These images allow scientists to distinguish between 1-meter-sized objects on Mars and study surface structure in a much more comprehensive way than any other mission to Mars.

MRO has been in orbit around Mars since 2006. Mission duration allows planetary scientists to track changes over time. The first image was produced to track seasonal changes in this region.

Mysterious movement of the stars. Physicists question the theory of gravity

Mysterious movement of the stars. Physicists question the theory of gravity