US, WASHINGTON (ORDO NEWS) — In 2004 and 2006, the Hubble telescope was able to capture something truly incredible. He found a planet that revolved around its star and was no more than 25 light years from our planet. In addition, this planet was in the visible spectrum.

Such a phenomenon among planets can be met extremely rarely, because they are relatively small in size and reflect very little light. This property has been named Fomalhaut b. It was recognized as a planet only in 2012. Scientists have suggested that it could be a gas giant. 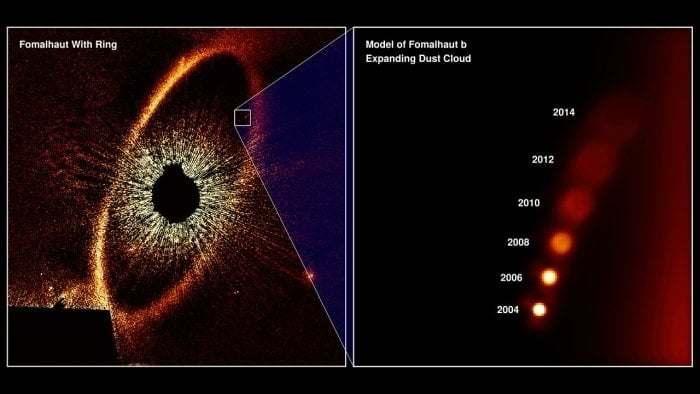 But when experts began to study the pictures taken in 2014, they were shocked. In place of the previously discovered planet, there was absolutely nothing. Scientists have suggested that in the pictures taken earlier, it was not a planet that was recorded, but a very rare phenomenon – the collision of two planetesimals that were the size of an asteroid.

Andras Gaspard noted that such clashes are indeed very rare. The scientist, along with colleagues, conducted a study during which it was possible to establish that after the collision of two objects, they gradually began to disperse. At the moment, the particles have become so small that the telescope simply cannot fix them, so it is not possible to conduct further observations.