Waring is convinced this is the second time an elephant-like statue has been discovered on Mars. And, despite all the evidence pointing to the opposite, the researcher is sure that intelligent aliens are hiding on the Red Planet.

Waring’s latest discovery is a photograph taken by the Curiosity rover on Mars’ 2765 day of its mission.

The picture shows a strangely shaped rock, which at first glance can be mistaken for an elephant’s trunk.

According to Waring, this is an elephant statue carved into the side of a Martian hill. 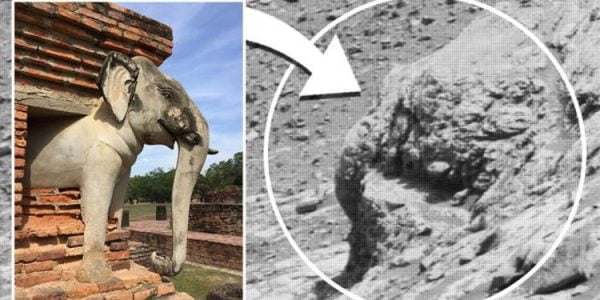 He stated, “I found another elephant on Mars … yes, you heard me right.”

“This elephant and what I found last year have the same features, including one distinctive … small ears.”

In November 2019, Mr. Waring shared similar NASA photos of the oddly shaped rock. Now the researcher is convinced that there is a direct connection between these two discoveries.

“There are many legends about elephants in the ancient mythology and religions of the Earth.”

“I think it’s time for NASA to talk about the elephants on Mars.”

However, scientists are likely to dismiss this discovery as a product of pareidolia.

4G network deployed on the Moon

4G network deployed on the Moon