(ORDO NEWS) —  Among the fragments of an ancient Mesoamerican fresco, archaeologists from Guatemala have discovered the earliest undeniable evidence of the sacred Mayan calendar.

On one of the tiny fragments of the fresco that once adorned the wall of the temple, traces of the head of an animal are visible under a black dot and a solid line – symbols denoting “7 deer”, one of the 260 days of the calendar.

Other historical records of this sacred calendar have been found earlier in Central America, but have proved difficult to date with any accuracy.

This find is a very rare example of a clear hieroglyphic day of the year that was written sometime between 200 and 300 BC, according to radiocarbon dating.

This is over a thousand years older than other calendar characters found elsewhere in Guatemala. And given how “mature” the writing looks, the researchers suspect that the calendar was in use long before this date was written down.

“The findings suggest that we can no longer single out one region of Mesoamerica, such as Oaxaca, as a ‘point’ of origin for writing or calendar records,” the authors write.

“The situation points to an even earlier origin for the calendar sometime during the Middle Preclassic, if not earlier, although the evidence remains circumstantial.”

The date 7 Deer was found among hundreds of other fragments in the foundation of the Las Pinturas pyramid, which is located in San Bartolo, Guatemala.

This pyramid is home to several layers of Maya history, each stacked on top of the other, dating back to around 800 BC.

The pyramid was the most recent structure built on the site and is famous for its wall paintings depicting Mayan mythology.

Beneath the pyramid are several other structures that once stood in its place. In 2005, during excavations under the fifth layer of the building, the remains of gypsum walls inscribed with hieroglyphs were discovered.

These scribbles are one of the earliest evidence of hieroglyphic writing in the Maya region.

Now subsequent excavations in the same layer have unearthed perhaps the earliest evidence of a hieroglyphic calendar.

The recent discovery only reinforces calls for the San Bartolo murals to be given cultural heritage status. Fragments of painted plaster were probably once part of a wall fresco, with some surfaces covered in mixed colors and others marked with black lines.

For example, the date “7 deer” is written in black line style.

It is known that the Maya adhered to a 260-day sacred calendar, which is still used by some indigenous communities today. The individual days in this calendar are named from 1 to 20 in a specific order, and they repeat 13 times a year. 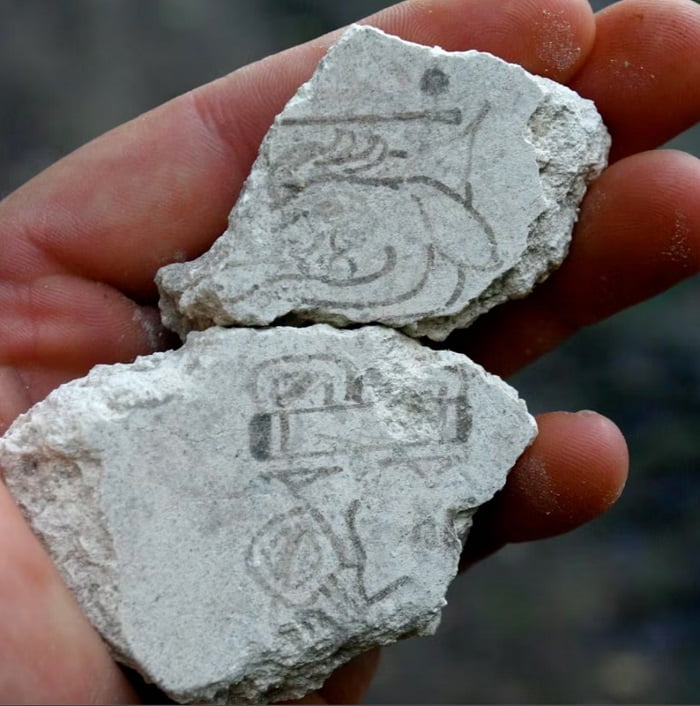 The upper fragment is a hieroglyph, which clearly shows the head of a deer. Above the head, framed by a simple background, is the number 7 in the form of a stroke and a dot.

The lower fragment, located directly below the calendar, contains another hieroglyph with an undescribed meaning. The vertical alignment suggests that the date at the top serves as a kind of inscription for what is below.

It is possible that the deer could also represent a name, as sometimes the Maya were named after calendar events (like April or August in English). Researchers, however, suspect that this is most likely a date. “The 260-day calendar has long been a key element in traditional definitions of Mesoamerica as a cultural region, and its persistence in many communities to this day testifies to its importance in religious and social life,” the archaeologists write.

“Our ability to trace its early use through 23 centuries is further evidence of its historical and cultural significance.”