(ORDO NEWS) — Danish underwater archaeologists have discovered three sunken ships at the bottom of the Baltic Sea, which are at least 300 years old.

Presumably two of them come from the Netherlands, one more from Scandinavia. Thanks to the conditions of the Baltic Sea, the ships are perfectly preserved.

Usually the work of archaeologists is focused on the search and excavation of ancient monuments hidden underground. However, in reality, the scope of their research is much wider.

For example, in recent decades (not least thanks to the ice mummy Ötzi, about which you can read in the material “From the Abyss in the Ice”), glacial archeology has gained momentum, in which scientists search for and study objects and biological materials that have been under the ice for a long time. and snow.

Another area is underwater archeology (or hydroarchaeology), which studies submerged cultural heritage sites.

Most often, the work of underwater archaeologists is learned through the study of long-wrecked ships. For example, this year an Antarctic expedition discovered the ship “Endurance”, which was wrecked off the coast of the southernmost continent more than a hundred years ago.

In the United States, scientists have raised a canoe about three thousand years old from the bottom of the lake. In addition, underwater archaeologists explore areas of land developed by man that have gone under water.

For example, in our country, such work is carried out in the well-known Greek colony of Phanagoria, a third of which is located at the bottom of the Gulf of Tamas. In Europe, research is being carried out on numerous lakes where once there were pile settlements or artificial islands.

An expedition from the Naval Museum of Jutland, led by Gert Andersen, with the participation of researchers from the National Museum of Denmark and JD-Contractor, which provided a research vessel and submersibles, conducted work in the Baltic Sea.

Scientists noted that, unlike the North Sea, where sunken ships are destroyed very quickly, in the Baltic Sea, wooden structures are preserved very well.

This is due to the fact that shipworms (Teredinidae) cannot live in fresh water at great depths in conditions of low oxygen content and an acidic environment.

For the same reason, industrial fishing is not carried out in the investigated area – otherwise the sunken ships would be damaged by gear. 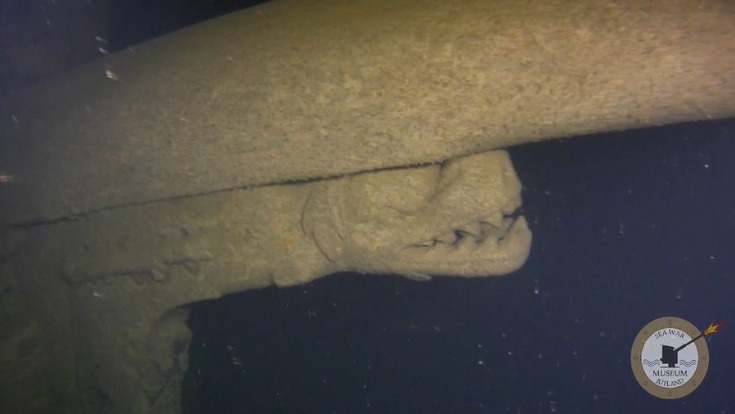 A team of marine archaeologists have managed to locate and film three perfectly preserved ships that are estimated to have lain at the bottom for over 300 years. According to the researchers, two of them are very likely cargo ships from the Netherlands.

The third – the largest – seems to come from Scandinavia. According to archaeologists, all three finds lie on the seabed at a depth of about 150 meters in complete darkness and, due to their excellent preservation, resemble ghost ships.

Using photogrammetry, scientists have been able to build detailed 3D reconstructions of the sunken ships. Moreover, archaeologists even managed to raise one of the structural elements of the ship to the surface, where it is planned to conserve and explore it.

Innsbruck armor for a giant

Innsbruck armor for a giant