(ORDO NEWS) — We know the climate crisis is already having a profound impact on global weather systems, changing temperatures, rainfall, wind patterns and more, and a new study predicts likely downpours over East Asia’s mountains in the future.

According to scientists, heavy rains will be caused by atmospheric rivers. These narrow corridors of concentrated moisture can quickly cause flooding when they hit a barrier like a mountain range, releasing huge amounts of water in a short amount of time.

According to models developed by the researchers, rainfall in East Asia will become more frequent and stronger in the coming decades as the planet warms. More water will be carried through the air and more precipitation will fall on the ground.

“We found that both atmospheric river water vapor transport and precipitation increase over the southern and western mountain slopes in East Asia in warmer climates,” the researchers write in their published paper.

“Atmospheric rivers will bring unprecedented extreme precipitation over East Asia in the face of global warming.”

Generally speaking, atmospheric rivers take moisture from warmer regions and transport it to colder regions. Their movement is controlled by changes in wind and temperature – just the kind of changes that climate change can cause.

When it comes to regions like Japan, Taiwan, northeast China and the Korean Peninsula, rainfall could reach record levels, according to the study. Most precipitation will fall on the southwestern slopes of the Japanese Alps.

To draw their conclusions, the scientists ran simulations based on meteorological data collected from 1951 to 2010, modeled that data until 2090, and hypothesized temperature increases under the most extreme climate change scenarios.

Many studies have been done on these atmospheric rivers in the past, but it is still not entirely clear how these bands of moisture will change as the climate changes – especially since their behavior is determined by topological features, as well as the movement of warmer and colder air.

For some regions, increased rainfall will be a boon, for others, extreme weather can lead to dangerous, life-threatening flooding. This is just the latest link between climate change and an increase in the frequency of extreme weather events.

The researchers say the simulations could be applied to other areas where atmospheric rivers could develop. While much uncertainty remains, based on this and other studies, it seems likely that much more precipitation will fall in parts of the globe in the coming decades.

“Our findings are likely to apply to other mid-latitude regions where the interaction between atmospheric rivers and steep mountains plays an important role in precipitation, such as in western North America and Europe,” Kamae says.

“These regions may also experience more frequent and intense extreme precipitation as the climate warms.” 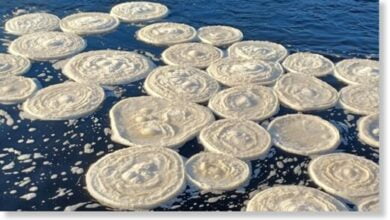 Rare ice pancakes formed on rivers in Scotland and England