(ORDO NEWS) — A group of scientists from the University of Tokyo in a new study described the details of the seismic activity of Mars. The results can cross out past theories about the formation of the Red Planet and provide detailed information about its composition.

The fourth planet from the Sun is from us at a distance of only 55 million to 400 million kilometers, depending on the position in orbit. But all the same, Mars is too far from us to launch spacecraft on it for any reason, because of which part of the research of Mars is carried out on Earth, and scientists imitate Martian conditions.

Keisuke Nishida, associate professor of the Department of Earth and Planet Sciences at the University of Tokyo, and his colleagues simulated conditions in the uppermost layer of the core of the Red Planet using molten metal: an iron-sulfur alloy. Its temperature was up to 1500 degrees Celsius at a pressure of 13 gigapascals.

Using a multidisciplinary press, researchers were able to measure the seismic activity of Mars. Nishida recorded P-waves moving through the alloy at a speed of 4680 meters per second, and photographed the process using x-rays of two synchrotron installations.

Able to pass through the rocks at a speed 13 times the speed of sound in air (343 m / s), P-waves create the first impulse. S-waves, called secondary waves, are responsible for the second shock – they are used to determine the distance to the source of the earthquake – the point of its occurrence.

“Due to technical reasons, it took us more than three years to collect the necessary ultrasound data, which I am very pleased,” said Nishida. “Micro-scale high-pressure experiments help explore large planets and their evolution.”

Scientists have long suspected that Mars has a core of iron and sulfur, but, given that on-site observations are not yet possible, seismic waves allow us to “travel” below the surface of the planet. 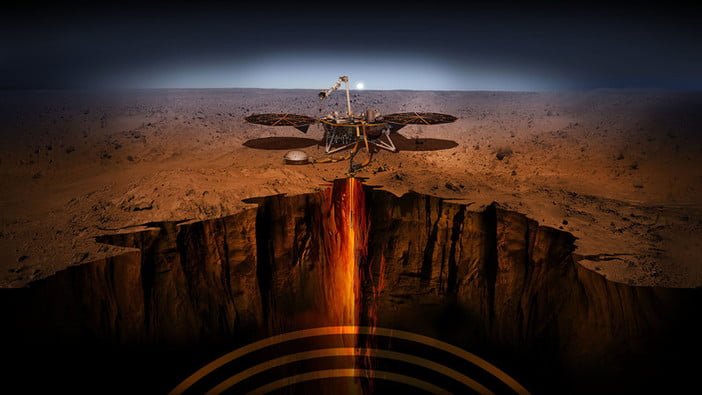 NASA’s InSight lander, which landed on the Martian plain of Elysium Planitia on November 26, 2018, is seeking seismic activity on Mars to learn more about the bowels of the planet and how rocky planets of the solar system formed. However, according to Nishida, “Even with seismic data [from InSight], there is a significant gap in the data. We needed to know the seismic properties of the iron-sulfur alloy, which is believed to comprise the core of Mars.”

Using the results of research by Nishida and his team, planetologists can read the seismic data from Mars to find out if the core of the Red Planet is an alloy of iron and sulfur.

“If this is not so, then we will learn something new about the origin of Mars,” said Nishida. – For example, if the core of Mars incorporates silicon and oxygen, then Mars, like the Earth, survived a collision with a large space object during its formation. So what is Mars made of and how was it formed? I think we’re about to find out.”