(ORDO NEWS) — Archaeologists from Germany and Iraq have unearthed a 4,000-year-old boat that was discovered four years ago in the vicinity of the ancient city of Uruk.

The seven-meter find was built from organic material impregnated with natural bitumen. This was reported in a press release from the German Archaeological Institute.

The ancient Sumerian and Babylonian city-state of Uruk was located on the territory of modern Iraq. It was located in the southern part of Mesopotamia, on the banks of the now dry branch of the Euphrates.

Already in the 4th millennium BC, Uruk developed as a city, becoming a religious and military center. By the beginning of the 3rd millennium BC, it was the largest agricultural settlement in Mesopotamia and the center of the cult of the goddess Inanna and the god Anu.

In the 24th century BC, Uruk became the capital of all of Sumer, and in the 22nd century, of Sumer and Akkad. It continued to be an important city until the 3rd century BC, when it was destroyed by the Sassanids.

Archaeological research of Uruk began in the middle of the 19th century and continued until the 1980s, accompanied by large-scale predatory excavations.

On an area of ​​about 530 hectares, scientists discovered the remains of a city brick wall almost nine kilometers long, residential areas, palaces, temples and workshops from different eras.

During the work, archaeologists unearthed samples of portrait sculpture, reliefs, cylinder seals and amulets, as well as more than 15 thousand cuneiform tablets and other inscriptions, of which about five thousand artifacts with proto-cuneiform date back to the end of the 4th millennium BC. Other finds also include metal tools and ceramics. 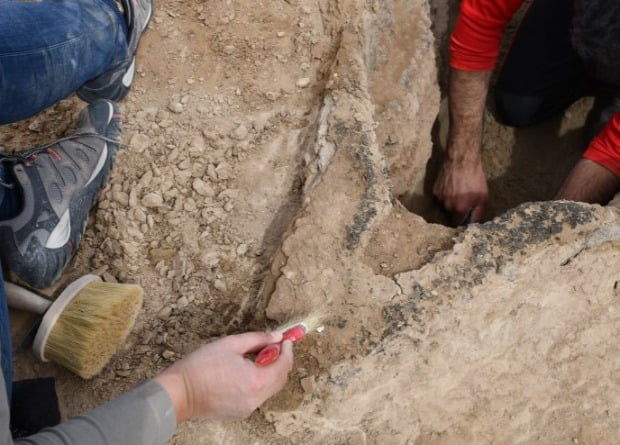 Scientists from the State Council for Antiquities and Cultural Heritage of Iraq and the German Archaeological Institute have unearthed the remains of a boat discovered during a 2018 survey of ancient irrigation canals, fields and small settlements in the vicinity of Uruk and recorded using photogrammetry.

Archaeologists began work on this site due to soil erosion, which led to the partial exposure of the ancient artifact and the threat of its destruction.

The researchers found a very fragile structure made of organic material, which could be reeds, palm leaves or wood. It was impregnated with natural bitumen. This boat reached seven meters in length and 1.4 meters in width.

Scientists noted that organic matter has not survived to this day, and it can only be judged by prints in a layer of bitumen, the thickness of which does not exceed one centimeter. She probably sank in the river about four thousand years ago.

The researchers built a three-dimensional model of the find and preserved it with clay and gypsum. The boat was taken to the National Museum of Iraq, where they plan to further study it and put it on display to the public.