(ORDO NEWS) — The authors of the new study set out to measure health inequalities retrospectively by comparing the mortality of politicians with the mortality of the population they represent.

Researchers at Oxford University’s Center for Health and Economics Research in the UK and the University of Melbourne in Australia compared death rates between politicians and the general population, based on data from 11 developed countries.

In recent years, the growth in life expectancy – the most important demographic indicator that has a direct correlation with the quality of the health care system – has been declining in many progressive states, although it had previously persisted there for decades.

According to experts, this state of affairs reveals a widening inequality that has become even more pronounced during the coronavirus pandemic: for example, in the United States, the difference in life expectancy among the richest five percent compared to the poorest five percent has increased by three years since 2001 to 2014.

However, socio-economic differences in mortality rates have long been known: as early as the studies of the 1860s, it was said that this rate is higher among those who do not pay taxes. True, later the authors of some works questioned any causal relationship between income and the risk of death.

A team of British and Australian scientists set out to analyze long-term relative and absolute inequalities in more detail by comparing the mortality rates of politicians and other populations in Australia, Austria, Canada, France, Germany, Italy, the Netherlands, New Zealand, Switzerland, the United Kingdom and the United States of America. (The findings cannot be generalized to low-income countries, the researchers say.)

The authors took into account variables such as gender of politicians, dates of birth, death, and inauguration, and checked the full details of a randomly selected subgroup of politicians (ten people per country) and of any politicians who died within a few months of being appointed to office. fast.

Then this information was compared with the table of survival of the entire population for the corresponding period.

In total, 57,561 politicians were counted in the states listed above, of which 40,637 died. In total, it turned out 2.6 million years of observations – about 46 years per politician.

“Across all countries, there were noticeable and consistent patterns. We found that current politicians have a lower mortality rate – both in relative and absolute terms – than the general population.

Differences increased significantly in the second half of the 20th century in all countries, with the maximum gap in life expectancy ranging from 4.4 years in the Netherlands to 7.8 years in the USA.

Today, politicians still have a big advantage compared to what was observed in the first half of the twentieth century: the difference in life expectancy ranges from three years in Switzerland to seven years in the States.

In recent years, before the pandemic, the gap narrowed as the life expectancy of the population as a whole grew at a faster pace than that of politicians. After 2019, this figure, alas, is falling. 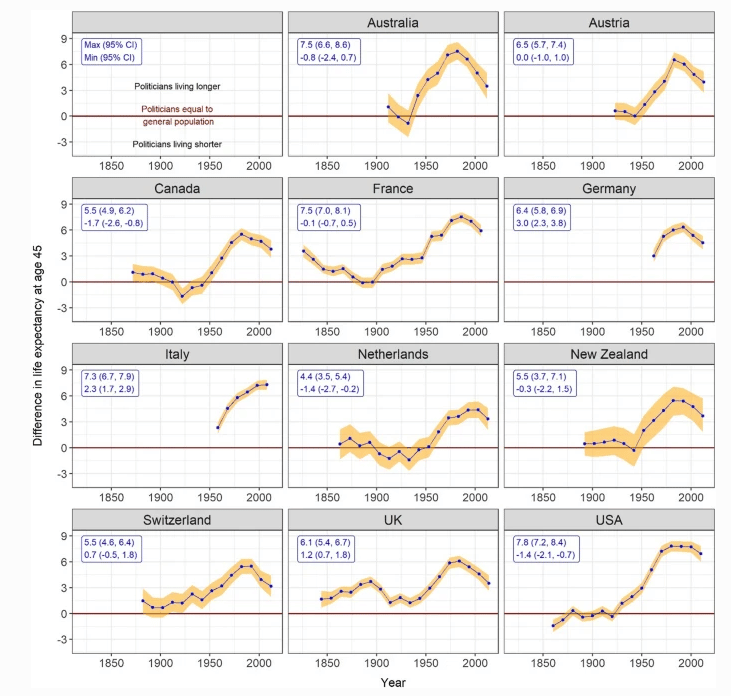 How can these findings be explained? According to the authors of the work, the fact is that, as previous studies have shown, long-term trends in people’s health are determined by successive waves of diseases: if they strongly affect certain subgroups of the population, this will provoke inequality.

“Take, for example, the level of tobacco consumption, which increased in the first half of the 20th century and then declined when evidence of its danger appeared.

It is interesting to note that eight out of ten US presidents died between 1850 and 1950 as smokers, including some from smoking-related illnesses (for example, Ulysses Grantwho died of throat cancer).

The high consumption of tobacco in the first half of the 20th century was not limited to politicians: smoking was common in society, including in high-status socioeconomic groups.

Large epidemiological studies have shown that smoking has reduced life expectancy by ten years. Thus, if smoking rates fell faster among politicians than among the general population, this could partly explain the emergence of a gap in life expectancy in many countries after 1950,” the researchers noted.

In addition, the explanation may lie in the improvement of methods of treatment of cardiovascular diseases. For example, the 32nd President of the United States, Franklin Roosevelt, suffered from hypertension (blood pressure – 230 to 126 millimeters of mercury in 1944), as did British Prime Minister Winston Churchill (160 to 90 millimeters of mercury in 1949); both died of stroke.

Just then there were disputes about the dangers of hypertension, and it was possible to unambiguously confirm that it reduces life expectancy by about five years after the Second World War. Then, in 1959, diuretics began to be used as antihypertensive drugs in treatment, and politicians began to take them first.

Scientists also pay attention to the role of infections like Covid-19, the spread of which is associated with contact between people.

Politicians are at greater risk of infection, as they may encounter different members of the population (although French scientists in 2020 did not reveal signs of excess mortality among those in power).

In addition to the likelihood of transmission of the virus, medical care is a key factor: for example, in the United States – and not only – it was politicians who were among the first to have access to vaccines, and the treatment of an infected Donald Trump from the coronavirus cost more than 100 thousand dollars.

Of course, income also plays a role, because the salary of politicians in many countries is much higher than the average level for the population: Australian politicians in the 20th century received two to six times more than an ordinary resident of the country.

But whether the very fact of the position held matters for life expectancy is not exactly known, and this will be the subject of future research. However, some studies have shown that election winners live about a year longer than their rivals.

10 unusual hotels in the world

10 unusual hotels in the world