(ORDO NEWS) — Cyanide could catalyze the abiogenic synthesis of amino acids and nucleotides on the early Earth, providing a supply of “building blocks” for future biological molecules.

Life on Earth began about four billion years ago when the planet was covered by a vast ocean. The first stage of this long process was chemical evolution – the emergence of complex organic molecules from more primitive precursors.

It is believed that this key transition led to the formation of a “primordial soup” – a saturated solution of substances in which RNA and protocells appeared and evolved – already quite full-fledged germs of life.

How exactly this happened, however, remains largely unclear. Today, living organisms are able to synthesize both amino acids (components of proteins) and nucleotides (links in DNA and RNA chains) from simple inorganic starting materials.

But for this they have enzymes that catalyze the necessary reactions. In the ocean of the early Earth, of course, there were no enzymes, which means that the question arises of how exactly the entire set of amino acids and nucleotides appeared in it.

A few months ago, Ramanarayanan Krishnamurthy and his colleagues showed that ordinary cyanides can serve as a catalyst for many transformations of organic substances. Cyanide is a simple compound of carbon and nitrogen that is often found in space and was introduced on the early Earth.

Therefore, scientists continued to study its possible role in the emergence of the “building blocks” of life. The results of their work are presented in an article published in the journal Nature Chemistry .

This time the chemists turned to the synthesis of amino acids. Today, living cells can make them from simpler keto acids , using special enzymes for this.

There is evidence that keto acids may have been present on the early Earth. Therefore, scientists decided to check whether cyanide is able to help their conversion into amino acids without the participation of proteins, in inanimate nature. 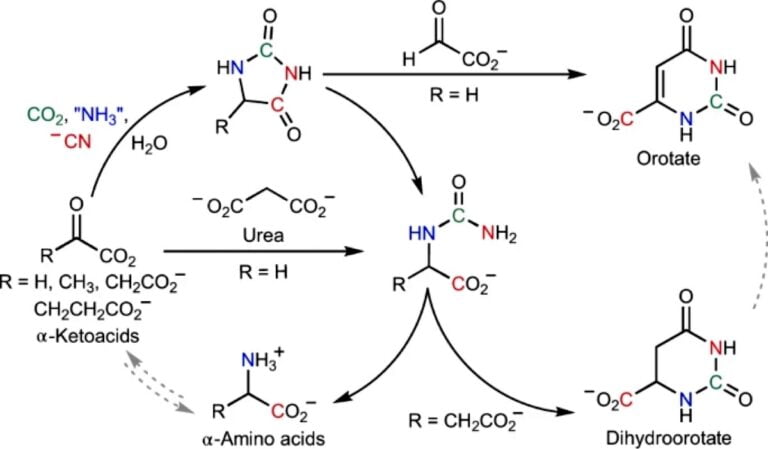 Indeed, experiments have shown that cyanide in the presence of a source of nitrogen (ammonia) and small amounts of carbon dioxide leads to the formation of a wide range of amino acids from keto acids.

Such reactions resemble what happens in living cells, except that they take place in an inanimate environment, without the participation of enzymes.

They proceed at room temperature and over a wide pH range. Moreover, among the by-products is orotic acid, a substance that acts as one of the precursors for the synthesis of nucleotides.

Thus, chemists have shown that among the simple compounds that existed on the early Earth, reactions could take place without any participation of living organisms, leading to the emergence of amino acids and nucleotides, the most important “building blocks” for more complex biomolecules.

Now scientists are going to find out exactly how they polymerized, forming proteins and nucleic acids, from which real life began.

Second attempt to launch the Artemis-1 mission is canceled

Second attempt to launch the Artemis-1 mission is canceled