(ORDO NEWS) — Although at first glance oil exploration should not affect the health of marine mammals, the noise from human-used seismic airguns is already causing physiological disturbances in narwhals.

Narwhals ( Monodon monoceros ) are bizarre marine mammals that live only in the Arctic Ocean and the North Atlantic.

Due to the harsh climate of their homelands and their small size, narwhals hardly suffered from the presence of people: a small number of animals were caught by local peoples, but in general the population remained stable.

Unfortunately, the growing needs of mankind have forced him to turn his eyes to the Arctic, and global warming, which has reduced the area of ​​sea ice, has made this region more suitable for regular shipping.

Before that, narwhals had already gotten into unpleasant situations because of people (for example, they got entangled in fishing nets set up by local residents), but at the same time, their reaction to stress was transient: after a couple of dives under water, the heart rate of the animals evened out, and the narwhals returned to normal life.

In the case of oil exploration seismic airguns, the situation is quite different: this is not a short-term, but rather long-term source of disturbance, unfamiliar to animals, so narwhals are terrified at its approach and try their best to swim away.

As a result, their heart rate “jumps” from extremely low, provoked by stress, to extremely high, associated with intensive swimming.

In addition, the habits of narwhals during deep-sea diving change: if they usually try to save energy by making fewer rowing movements, then under stress, animals make up to 40 strokes per minute, and their breathing rate increases by one and a half times.

This leads to a large expenditure of energy, besides, in this state, the whales hardly feed and soon begin to starve.

Over the past two decades, anthropogenic noise in the ocean has become a serious problem for many marine mammals, and it has especially seriously affected those species that dive for food at considerable depths.

The presence of humans in the Arctic does not yet lead to, say, mass stranding of cetaceans, but in the absence of conservation countermeasures, such a scenario could become a reality in the very near future. 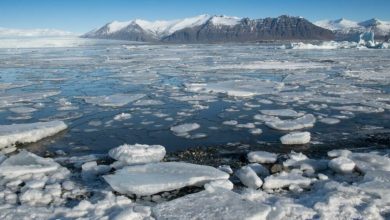