(ORDO NEWS) — In western India, a metal ring has fallen on a small village. The item may be part of a Chinese rocket launched last year, according to officials and local media.

Most rocket debris burns up in the atmosphere, but large objects can fall to the ground, posing a danger to people.

A metal ring with a diameter of two to three meters and weighing more than 40 kilograms was discovered in a village field in the state of Maharashtra late on Saturday evening (April 2).

“We were preparing a communal celebration when a red disc appeared in the sky and crashed into an open area in the village,” a woman from the Chandrapur district of Maharashtra told Times of India. “People ran to their houses, fearing an explosion, everyone locked themselves inside for almost half an hour.”

In addition to the ring, a large metal ball with a diameter of about half a meter fell in another village nearby. Now the local authorities are exploring the surrounding villages in search of other objects. The ring and ball were collected for examination.

A spokesman for the Indian Space Research Organization (ISRO) told The Times that the time of the objects’ fall was “the closest” to the time of the return to the wreckage of a Chinese rocket launched in February 2021. “If the rocket bodies survive re-entry into the atmosphere, rocket parts such as nozzles, rings and tanks could fall to Earth,” another ISRO spokesman told the newspaper. Astronaut Jonathan McDowell of the Harvard-Smithsonian Center for Astrophysics noted that the ring corresponds to a fragment of China’s Long March 3B rocket.

Objects release enormous amounts of heat and friction when they enter the atmosphere, which can cause them to burn up and disintegrate, but larger objects may not be completely destroyed.

Fireballs soaring into the sky scared the people of India

Fireballs soaring into the sky scared the people of India 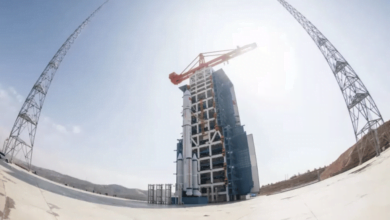