(ORDO NEWS) — What happens to information after it goes beyond the event horizon of a black hole? There were suggestions that wormhole geometry could help us solve this tricky problem – but the math was tricky, to say the least.

In a new paper, an international team of physicists has found a workaround to better understand how a collapsing black hole can avoid violating the fundamental laws of quantum physics (more on that in a moment).

Although the work is purely theoretical, it suggests that there are probably things we are missing in our quest to resolve general relativity with quantum mechanics.

“We have discovered a new wormhole space-time geometry that was not included in conventional calculations,” says physicist Kanato Goto of Cornell University and RIKEN in Japan.

“The entropy calculated with this new geometry gives a completely different result.” The black hole information paradox is one of the unresolved contradictions between Einstein’s general theory of relativity and quantum mechanics.

According to general relativity, the event horizon of a black hole is the point of no return. Everything that passes beyond this critical point is inexorably pulled into the black hole’s gravity well, and no speed in the universe, not even the speed of light in a vacuum, is sufficient to escape. It’s all gone, that’s all. Caput. Irrevocably.

Then, in the 1970s, Stephen Hawking came along and suggested that, given quantum mechanics, black holes could still emit radiation.

According to the theory, this happens as a result of the black hole’s interference with the wave-like properties of the surrounding particles, which causes it to “glow” at a temperature that gets higher as the black hole’s size shrinks.

Since the “glow” does not look like what entered the black hole in the first place, it would seem that everything that fell into the evaporating black hole is gone forever.

But according to quantum mechanics, information cannot simply disappear from the universe. Many physicists have explored the possibility that somehow this information is encoded in Hawking radiation.

Goto and his team wanted to explore this idea mathematically by calculating the entropy of Hawking radiation around a black hole. This is a measure of disorder in a system that can be used to diagnose information loss in Hawking radiation.

According to a 1993 paper by physicist Don Page, if disorder is reversed and entropy drops to zero as the black hole disappears, then the missing information paradox should be ruled out. Unfortunately, there is nothing in quantum mechanics that would allow for such a change.

A wormhole appears, or at least a mathematical copy of a wormhole in very specific models of the universe. It is a connection between two regions of the warped sheet of space-time, a bit like a bridge over a ravine.

This concept of wormholes, combined with black holes, gives us a different way to calculate the entropy of Hawking radiation, Goto says. “A wormhole connects the inside of a black hole and the radiation outside, like a bridge,” he explains.

When the team ran the calculations using the wormhole model, their results matched Page’s entropy curve. This suggests that information that falls outside a black hole’s event horizon may not be lost forever.

But, of course, some questions remain. Until they are answered, we cannot consider the information paradox of the black hole finally resolved.

“We still don’t know the underlying mechanism of how information is carried away by radiation,” Goto says. “We need a theory of quantum gravity.” 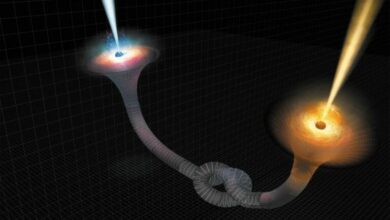 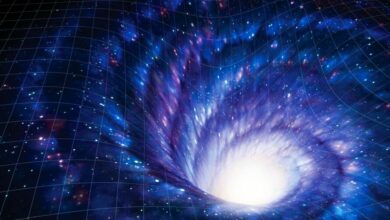 Physicist Daniel Jafferis: Wormholes exist but are of no value to space travel