(ORDO NEWS) — Strong in some places and flexible in others, the pants were designed for riding.

With the help of an experienced weaver, archaeologists unraveled the design secrets of the world’s oldest pants. The 3,000-year-old wool trousers belonged to a man buried between 1000 and 1200 BC in Western China.

To make them, ancient weavers combined four different techniques to create garments specifically designed for horseback combat, with flexibility in some places and strength in others.

Most of us don’t think much about trousers these days, except to lament the need to wear them in the morning. But in fact, the trousers were a technological breakthrough.

Horse shepherds and warriors needed their trousers to be elastic enough to allow the wearer to swing their leg over the horse without tearing the fabric or feeling pressure. At the same time, they needed additional reinforcement in critical areas such as the knees.

To some extent, this has become a material science problem. Where do you need something elastic, and where – durable? And how do you make a fabric that provides both?

For the creators of the world’s oldest pants, made in China some 3,000 years ago, the answer seems to have been to use different weaving methods to produce fabric with specific properties in certain areas, despite the fact that all garments were woven from the same fabric. or spun wool fibre.

The oldest known pants in the world were part of the funeral attire of a warrior, who is now called the Turfan Man.

He wore trousers of woven wool with a poncho girded around the waist, ankle boots, and a wool band adorned with shells and bronze discs. The basic construction of the pants is strikingly similar to the pants most of us wear today, but a closer look reveals the level of engineering that went into their creation.

Together with her colleagues, archaeologist Maike Wagner from the German Archaeological Institute recently studied 3,000-year-old trousers in detail. A modern weaver created a copy of the trousers to better understand the technique of making this piece of fashion history.

Most trousers are made from what is known as twill, which you might recognize if you’ve ever worn jeans. The world’s oldest twill fabric comes from the Hallstatt salt mine in Austria and has been radiocarbon dated slightly earlier than the trousers, between 3,500 and 3,200 years ago. Twill produces a diagonally ribbed, heavy fabric that is also more stretchable than the original wool thread.

Judging by other items in his grave, which included a battle-axe, a bridle, and a horse bit, Turfan Man probably spent much of his time fighting on horseback, so the stretchy twill fabric would have saved him the trouble of tearing his pants every time he sat down. into the saddle.

For more room, the ancient weaver made the crotch of the pants wider in the center than at the ends, so that the piece of fabric could gather or stretch in the middle to give the wearer more flexibility where it really counts. 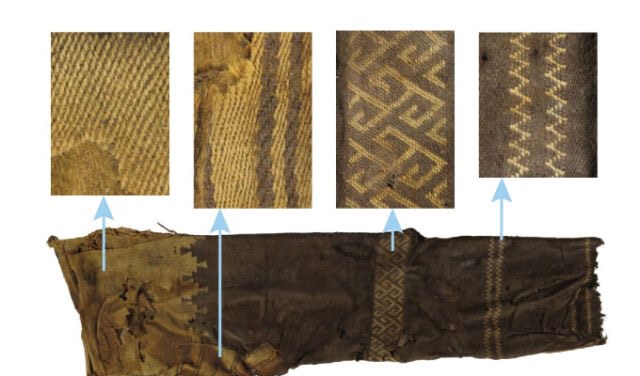 Flexibility isn’t everything, however, especially in the rough use of mounted warrior clothing. In the area of ​​the knees, the ancient weavers switched to another method of weaving called tapestry, which gives a less flexible, but thicker and more durable fabric.

At the waist, the third method of weaving provided a thick belt that helped keep the pants in place, which no doubt prevented extremely embarrassing incidents on the battlefield. And all these components were woven as a single piece; there is no evidence that the tissue was cut.

Turfan bloomers are an extremely functional design, but they are also pretty darn quirky. As the weavers worked on the stretchy, spacious crotch, they alternated weft threads of different colors to create pairs of brown stripes on a white background.

Zigzag stripes adorn the ankles and calves of the pants, as well as a step pyramid pattern. This pattern led Wagner and her colleagues to suggest that the Turfan Man culture may have had some contact with humans in Mesopotamia, which led them to include ziggurats in the woven motif.

Other aspects of the pants testify to the interaction between widely scattered groups of people from modern Kazakhstan to East Asia.

Across the knees, the pattern of oblique, criss-crossing T-shapes is remarkably similar to that found on bronze containers from a 3,300-year-old site in China and on pottery from a 3,800-3,000-year-old site in Western Siberia – about the same age as the trousers, but about 3,000 kilometers apart.

Tapestry weaving, which gives strength to the knees of trousers, was first developed by weavers in Southwest Asia.

The twill that makes the rest of the trousers so flexible probably originated in Northwest Asia (people as far west as Austria also used this technique 3,200 years ago, although it is possible that people in both places developed twill independently. ).

In other words, the invention of pants was a matter of combining different weaving techniques from cultures thousands of miles apart. The weavers of Yanghai, an oasis in the Tarim Basin where the Turfan Man is buried, were able to make this connection through geography and nomadism.

In general, the people of the Turfan Man made a living driving herds of cattle across the steppes. Their annual routes covered vast distances, and Yanhai became the central point in a vast network of herding routes that linked the far reaches of Eurasia and which eventually developed into the trade routes known as the Silk Road.

World’s oldest trousers are a 3,000-year-old marvel of engineering

World’s oldest trousers are a 3,000-year-old marvel of engineering