(ORDO NEWS) — Cheetahs are famous for their speed, but they are not even close to the falcon, which swoops down on unsuspecting prey at speeds of over 300 km per hour.

The peregrine falcon is one of the most efficient predators on Earth, and this efficiency is largely due to its unmatched speed.

During its characteristic dive, this majestic creature reaches an average speed of 320 km/h, but the highest measured speed of a peregrine falcon is actually 389 km/h, making it faster than most sports cars.

And this is obviously much faster than the cheetah’s record of 102 km/h.

But it is in diving that they show their true strength, swooping down at breakneck speeds that would actually harm any other creature. 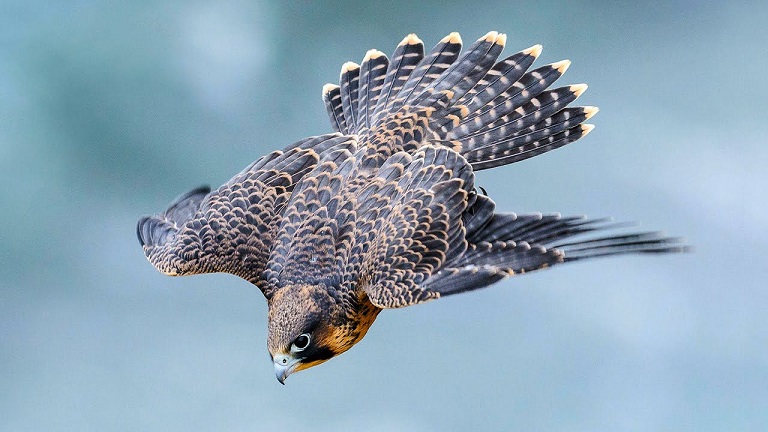 They not only have a lightweight frame and an aerodynamic shape that allows them to reach incredible speeds, but also have special features that allow them to withstand such speed.

For example, diving underwater at over 300 km/h would damage the lungs of any other bird, but the falcon has tiny tubercles that vent compressed air away from its nostrils, allowing it to breathe easily. Special membranes also protect the bird’s eyes during a dive.

Another important feature of the peregrine falcon is the speed of processing visual data . 129 Hertz is the highest rate among all known animals, allowing you to register 129 frames per second.

By comparison, we humans have a maximum processing speed of 60 Hertz for visual data.

The peregrine falcon’s unrivaled diving speed allows it to attack prey from a few hundred meters to several kilometers in just a few seconds, often using its speed to deliver a serious blow to its prey.

But diving at full speed would kill them as well as their targets, so the bird will use its wings to increase drag and reduce speed to an acceptable level.

It is sad to think that just a few decades ago this majestic creature was almost extinct, and all because of man.

Some pesticides have affected adult birds and significantly thinned their eggshells, preventing embryonic development. This caused serious damage to peregrine falcons and many other bird species.

Only after the ban on the use of these pesticides in 1972 did the bird population begin to recover.

By 1999, peregrine falcons were removed from the list of endangered species, and since then their numbers have remained stable.