(ORDO NEWS) — The British Ecological Society published a study report: according to it, for most small or flying creatures, as well as for marine predators, time passes more slowly than for everyone else.

Everyone who has ever tried to slap a fly with a newspaper knows that this is far from always possible – most often the fly manages to react in advance and fly away.

According to a study by an international group of biologists, this is because time passes much more slowly for a fly than for a person. Your swift kick looks to her like you’re moving in slow motion.

Of course, it is impossible to measure this indicator using a stopwatch, but the researchers found another way: they managed to establish how many events per second various living creatures can track.

For this, short flashes of light were used and electroretinography was used to measure the speed at which the optic nerve sends information to the brain.

In total, 138 species were studied, and it turned out that creatures that lead a more dynamic lifestyle are equipped with visual systems that can detect changes at a tremendous speed.

This makes sense: if you’re moving fast, or you need to pinpoint the trajectory of your prey, then you need very fast vision to perceive rapid changes in your environment.

Dragonflies turned out to be absolute champions: they are able to track up to 300 different events in 1 second. This is far ahead of human capabilities: we are not able to catch more than 65 in the same time.

In other words, the maximum visual frequency of a dragonfly is 300 Hz, and that of a human is 65 Hz. Dragonfly time flows 4.6 times slower than human time.

Among vertebrates, the pied flycatcher, a tiny black-and-white bird that lives in the forests of Europe, Western Siberia and North Africa, holds the championship. Its indicator is 146 Hz.

Dogs see at a frequency of 75 Hz (and this is also faster than humans), and salmon vision is one and a half times faster than ours – 96 Hz. 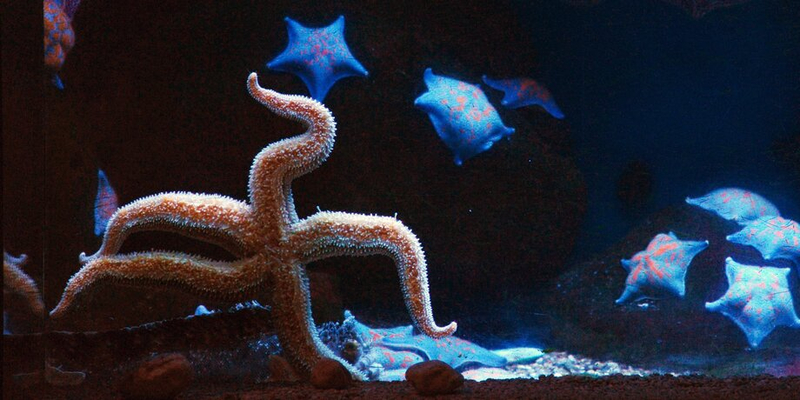 Starfish have the slowest eyes. Yes, oddly enough, these animals (at least some species) are able to see: hundreds of photoreceptors are located at the ends of their rays.

True, they see poorly, about 500 times worse than a person, and their viewing angle is only a few degrees.

With a very slow pace of life, starfish have absolutely no need to react to fast events, so their speed of vision is only 0.7 Hz, that is, they can perceive movements that are made a little faster than once per second.

Time passes very quickly for them, and the world around them, from the point of view of a starfish, changes at a staggering rate.

There were also unexpected discoveries. For example, it turned out that aquatic predators most often outperform terrestrial ones – sharks and barracudas see faster than lions and even cheetahs.

Scientists have not been able to figure out what it is connected with. Perhaps under water, a predator has to keep track of more rapidly changing events than on land.

It also turned out that people are able to accelerate their vision within a small range. For example, one study found that experienced soccer goalkeepers were able to track more events per second than newcomers just starting out in the sport.

There is one more news: it turned out that coffee speeds up human vision for a short time, albeit in very small limits.

Our eyes, after ingestion of caffeine, begin to react to the world around them with a slightly higher frequency.

Conclusion: coffee slows down time. If you want to extend a pleasant moment or not miss a quick hit, ordering a double espresso should work.