(ORDO NEWS) — A young Chinese woman was recently admitted to the hospital with multiple broken ribs after a coughing fit caused by eating spicy food.

If you have ever eaten something spicy, you probably know that this food can cause a slight cough.

What you probably didn’t know is that in extreme cases, a cough caused by spicy food can actually cause broken bones.

A case in point is a Chinese woman from Shanghai who, due to her extreme thinness and poorly developed musculature, broke four ribs while coughing over spicy food.

A woman named Huang told Shanghai doctors that she ate spicy food, which at one point made her cough.

During a particularly severe cough, the young woman allegedly heard a sharp crack in her chest and immediately felt pain when breathing and trying to speak. 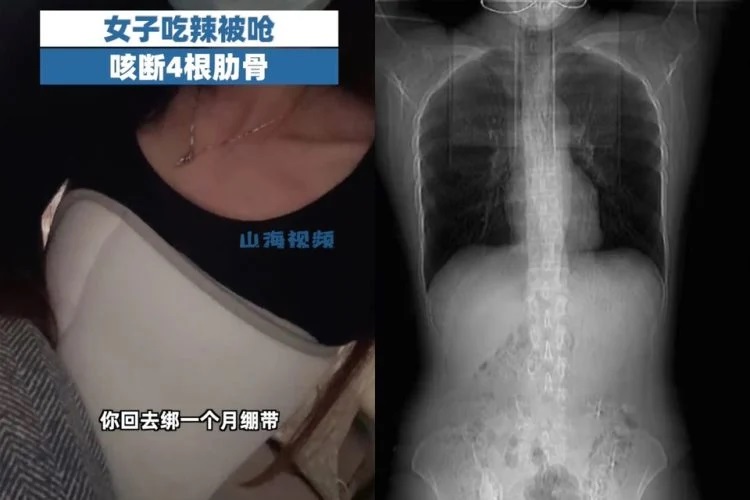 “At first I thought it was a stroke or something, I didn’t expect it to hurt so much,” Huang said. “I couldn’t even walk.”

Huang managed to get to a local hospital, where a CT scan showed four broken ribs. After listening to the woman’s story about her cough, the doctors performed a bone density test, which turned out to be normal. After examining the woman and performing additional tests, the surgeon concluded that the bone fractures were caused by her weak muscles.

“Your ribs are clearly visible under the skin.

There are no muscles to support the bone, so your ribs can easily get fractured when you cough,” the doctor said, adding that if she does nothing, she is likely to have similar fractures in the future.

The Chinese woman said that she was 171 cm tall and weighed only 57 kg, and admitted that she had a very thin upper body. Now she will have to rest and spend a month in a medical corset, but after that she plans to put on some weight and increase muscle mass.

Goats climbed into a police car and ate important documents

Time Traveler? A man with a mobile phone in a 1943 photograph

Goats climbed into a police car and ate important documents

Time Traveler? A man with a mobile phone in a 1943 photograph