(ORDO NEWS) — On the island of Hawaii, after almost 40 years of silence, the largest active volcano on Earth, Mauna Loa, began to erupt. The scientific observer Nikolai Grinko talks about the consequences this can lead to.

On November 27 at 23:30 local time, the webcams of the Hawaiian Volcanic Observatory recorded how lava burst out of the cracks of Mauna Loa in fountains and began to spread along the bottom of the vast basin of the volcano – the caldera.

Airlines flying in the skies over Hawaii were immediately sent a warning with a red danger code, all flights in the area were canceled. The reason is not only the rising smoke and ash, but also the thin strands of volcanic glass that are ejected to great heights and can get into the turbines.

News services all over the planet immediately published alarming messages with the headlines “The largest volcano on Earth woke up!”.

The yellow press began to scare readers with the impending volcanic winter, linking the eruption with global climate change and prophesying a catastrophe on a planetary scale. But in order to figure out whether Mauna Loa can really destroy humanity, you need to understand what it is.

This is indeed the largest active volcano on our planet. Its surface part occupies more than 5,000 square kilometers – almost half of the island of Hawaii. The age of the volcano, according to experts, is about 700,000 years.

During this time, its volume reached an impressive 75,000 cubic kilometers of rocks – about three times the volume of Lake Baikal.

Imagination draws a giant rock hanging over the ocean and eclipsing the sky. But in fact, everything is quite different.

Let’s start with the fact that “Mauna Loa” in Hawaiian means “long mountain”. This expression perfectly describes the situation: the volcano is much wider than it is tall, in photographs from a distance it resembles a very gentle hill. Mauna Loa is a shield volcano with very liquid lava.

Therefore, it spreads quite far, but at the same time it cools down relatively quickly. This process forms a hill with a characteristic flattened shape. For the same reason, its eruptions do not last too long – the magma reserves under it run out pretty quickly.

Mauna Loa is well studied, and its eruptions in the closest historical period to us are documented. The previous one happened in 1984, it lasted about two weeks, but the most active phase took about eight hours.

Then the lava moved towards Hilo, the largest city on the island with a population of 44,000 people. But between it and the volcano there is a wide strip of tropical rain forests, which has become a barrier. 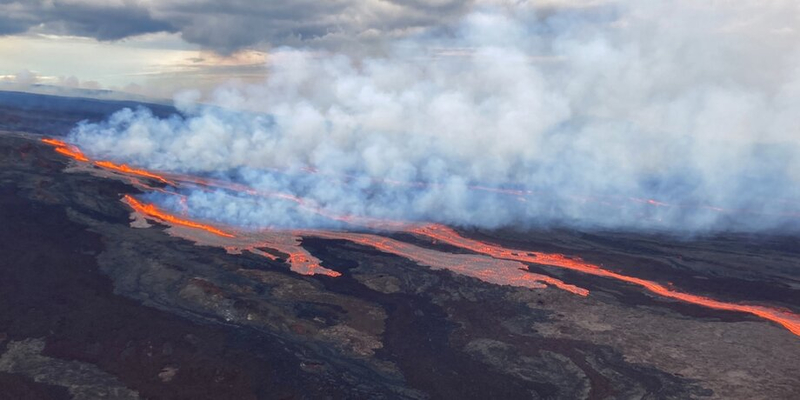 The 1975 eruption lasted 20 hours, and then the lava did not even go beyond the caldera. In 1950, Mauna Loa woke up at night and was able to destroy the main road around the island, repairs continued for several weeks.

Of course, all this does not allow one to disregard the largest active volcano on Earth. Seismologists and volcanologists do not stop watching the “long mountain” for a minute, they track the direction of the wind and the amount of magma.

Ashfalls and volcanic gases, such as sulfur dioxide, pose the greatest danger to the health of the local population now.

Residents of Hawaii, especially those living on the lee side of Mauna Loa, are advised not to leave their homes in case of ash in the air, and the weather service constantly monitors the composition of the air.

Experts do not believe that the current eruption will be very different from the previous ones, and there is every reason to trust them.