(ORDO NEWS) — Paleontologists know for sure that dinosaurs did not attempt to mummify themselves, as did the ancient Egyptians or some Buddhist monks.

Despite this, they found some dinosaur fossils, described as “mummified” because some of the skin of the ancient lizards was preserved.

Skin preservation is rare in fossils, and paleontologists believe it requires a fortunate combination of circumstances. However, recent discoveries have shown that this is not as rare as previously thought.

Dr. Stephanie Drumheller of the University of Tennessee-Knoxville and her colleagues presented an explanation for why more dinosaur fossils with skin are being discovered.

The traditional view of mummification is that skin preservation requires the carcass to be dried and then buried so quickly that neither scavengers nor decaying bacteria can reach it.

So, the discovery of an Edmontosaurus called NDGS 2000 near Pretty Butte in the Hell Creek Formation with bite marks on patches of surviving skin posed some problem. These are the first recorded signs of predation in a mummified dinosaur. 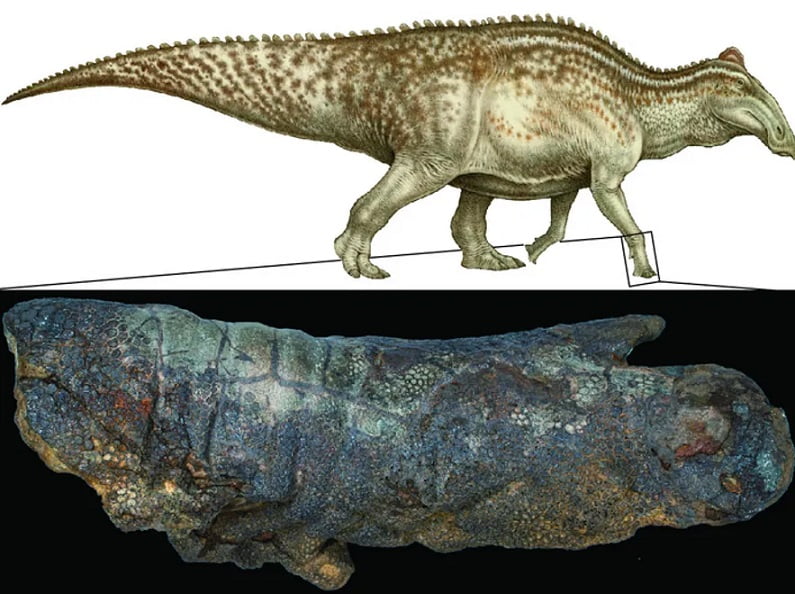 Obviously, this specimen was not protected by rapid burial from scavengers, and yet mummification occurred, even including decomposed proteins.

Drumheller explains this by saying that Edmontosaurus skin was not considered a delicacy during the Late Cretaceous. Instead, the crocodile’s relatives wanted to get to its internal organs.

Bite marks on the skin indicated their efforts to remove the obstruction. Once the barrier was broken, they ate the tasty morsels and left skin and bones behind.

The holes made by the predator allowed “gases, liquids and microbes associated with decomposition to escape,” the document says.

The authors gave the process the catchy name “drying and deflation” and note that it has been observed that this allows the skins of modern mammals to be preserved.

They do not suggest that all previous dinosaur mummies, including the remarkably preserved Hadrosaurus that is currently being recovered, formed in this way.

They believe that there are at least two ways in which dinosaur skin was mummified.

The authors note that there is a problem with the traditional explanation for mummification, as desiccation and rapid burial don’t really go together.

“Explanations for these conflicting conservation pressures are often speculative and unsatisfactory, relying on unrealistically fast drying methods or ignoring the impact of smaller scavengers and decomposers,” the paper states.

There is still a lot of confusion about dinosaurs that died in humid environments, as was likely the case with this edmontosaurus given the climate in North Dakota at the time and the crocodile tooth marks on its bones.