(ORDO NEWS) — A new study suggests that Mars drones, such as the Ingenuity helicopter making periodic sorties on the Red Planet, “may cause tiny electric currents to flow in the Martian atmosphere,” according to NASA.

The potential currents are not a threat to the helicopter, if they do indeed arise in the first place, but would create an interesting effect for any cameras that are nearby. More broadly, the study provides an avenue to better understand the accumulation of electric charge on rotor blades, known as “triboelectric charging.”

“The faint glow would be most visible during evening hours when the background sky is darker,” study lead author Bill Farrell, a plasma scientist at NASA’s Goddard Space Flight Center in Maryland, said in the same statement.

Regretfully, he added, Ingenuity is an experimental drone not cleared to fly at dusk or dawn, but we might be able to observe the effect on future Martian helicopters.

The process by which Martian drones might glow is similar to common effects on Earth from electrical currents, including corona or electrical glow sometimes seen on aircraft, along with ships in electrical storms known as St. Elmo’s Fire, NASA said.

Triboelectric charging occurs during friction that moves electrical charge between objects, which you can commonly see when a person rubs a balloon against their hair on Earth. The balloon then “attracts” the person’s hair, showing evidence of the electric field induced by the rubbing.

Laboratory measurements and computer models suggest that when Martian drones spin their blades, they encounter dust grains from the constant storms and dust devils on the Red Planet’s surface.

“As the blades impact the grains, charge is transferred, building up on the blades and creating an electric field,” NASA said in the statement.

“As charge builds to high levels, the atmosphere starts to conduct electricity, a process known as ‘atmospheric breakdown.’ [The process is] creating a population of electrons that form an enhanced electric current that acts to dissipate or offset the charge build-up on the rotorcraft.” 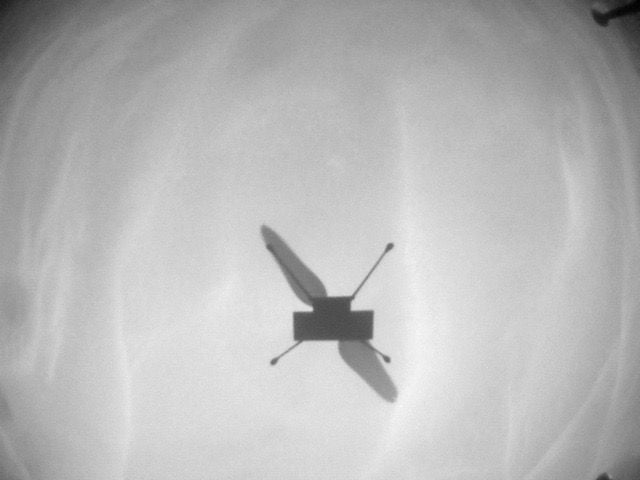 A study based on this research was published March 10, 2021 in the Planetary Science Journal, and NASA chose to highlight the study in a press release this week on Tuesday (Feb. 1).

The study was published before the Perseverance rover and Ingenuity landed on Mars on Feb. 18, 2021; nearly a year later, Ingenuity has made 18 flights and spent more than 30 minutes aloft during these various sorties.

Signs of life found on Mars can be mimicked by nature

Signs of life found on Mars can be mimicked by nature