US, WASHINGTON (ORDO NEWS) — Leprosy left a deep mark in the history and culture of mankind. Until now, lepers are perceived as people who carry a threat and who need to stay away. In the past, the disease was very common, and the only effective means of control was the expulsion of patients from society, which is still practiced in some countries. Lenta.ru talks about leprosy, which became the scourge of Europe even before the plague and cholera and continues to terrorize the poor, despite the efforts of international health organizations.

Compared to cholera and plague, leprosy is a silent and latent disease. After infection, it may take ten or even twenty years before the first symptoms occur. First, pain-insensitive spots appear on the skin, hands and feet begin to go numb. It is very important to begin treatment as soon as possible, because several months after the disease has manifested itself, irreversible damage to the peripheral nerves occurs.

The person loses control of the muscles and is paralyzed. But even earlier, the body is attacked by secondary infections that affect the eyes, skin, mucous membranes and articular cartilage in the hands and feet. The fingers are deformed and shortened due to the death of the phalanges, facial features are distorted, trophic ulcers form.

The leprosy causative agent itself, the Mycobacterium leprae mycobacterium, is not a deadly killer, like a plague stick or cholera vibrio. This is an obligate parasite, unable to live outside human cells, so it is in his interests not to kill the host quickly. But it destroys the primary protective barrier of the body, making a person vulnerable to many other pathogens. Secondary infections are the leading cause of death for patients with leprosy.

A person with leprosy becomes a peddler of mycobacteria, infecting other people. At risk include poor people suffering from malnutrition and reduced immunity. Although it is still not entirely clear how M. Leprae enters the body, it is believed that infection occurs through the upper respiratory tract. It is now known that a single close contact with diseased leprosy, for example, shaking hands or being near an infected person, rarely leads to infection. M. Leprae is not sexually transmitted and does not enter the unborn baby if the carrier is a pregnant woman.

From the depths of centuries

Leprosy is one of the oldest diseases that was known in ancient China, India, Egypt, Greece and Rome. The first mention of it dates back to 600 BC. At the same time, other fungal skin diseases were often confused with leprosy. The word “leprosy” itself comes from the ancient Greek Λέπος, which means “scales”, and literally translates as “a disease that makes the skin scaly.” This word was used to denote any skin disease leading to peeling, but then assigned to leprosy.

Before the advent of modern medicine in Africa and Eurasia, the Trichophyton schoenleinii fungus was common, causing a favus, or scab, in which a firm crust forms on the skin. Patients with favus or psoriasis were also declared lepers, expelled from society or fell into leper colony. Syphilis was sometimes confused with leprosy.

In the Middle Ages, in the XI century, a large epidemic of leprosy flared up in Europe. Among experts, a single picture has not yet developed, where did the disease come from. Many experts believe that the cause of the outbreak was the Crusades, as a result of which M. Leprae arrived in Europe from Palestine. In England, leprosy could get with the Vikings who brought from the continent the fur of infected squirrels. According to an alternative hypothesis, leprosy arose in Europe itself and existed for several thousand years. In any case, the disease spread widely in the XII-XIV centuries, reached a peak in the XVI century, and then unexpectedly receded, turning into a “forgotten disease”. Now it is found only in poor countries.

The medieval epidemic led to the emergence of leper colony – medical and isolation centers for patient care. Leprosaria has become the main way to contain the disease. Leprosy was so prevalent that in some regions it struck about three percent of the population. Naturally, they could not accommodate all patients with leprosoria, therefore they often declared lepers “untouchable”, they were forced to put on recognizable closed clothes and carry bells with their bells that warned the others about the patient’s approach. 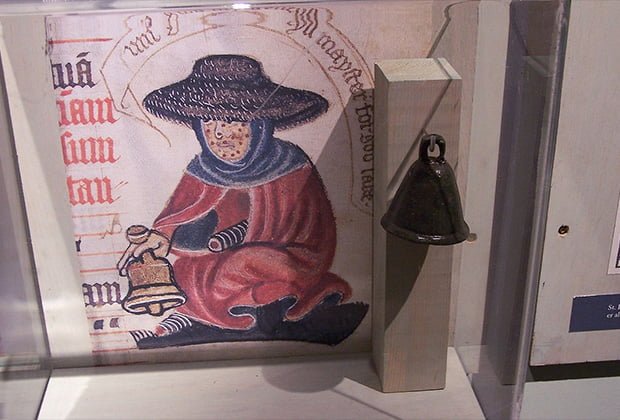 The myths about leprosy, popular at that time, made the disease worse than it is. It was believed that leprosy is a divine punishment, which means that the patient carries evil in himself, is sinful and is able to harm others. The infected were perceived by society as cursed and unclean in spirit, they were expelled from the city, and sin experts, priests, were engaged in diagnosis and “treatment”.

Leprosy imposed a stigma on people, they were considered almost dead and arranged for them a “live” funeral, after which they were forever banished from society. There are also known cases of reprisals against patients when lepers were buried alive in the ground, burned at the stake like sorcerers, dumped into ravines or drowned.

Leprosaria was created at monasteries, where patients could feel relatively safe, and healthy citizens felt relieved due to the fact that lepers stayed away from them. By the 13th century, up to twenty thousand leper colony appeared in Europe, including hospitals under the Order of St. Lazarus, later called hospitals.

Although leprosorium to some extent limited the spread of the disease, the main reason for the end of the epidemic, as recent studies have shown, is the development of European population resilience. Reconstruction of the genome of mycobacteria showed that the causative agent of leprosy is almost unchanged genetically, and modern strains are identical to the ancient ones. This means that the epidemic did not end because the pathogen itself somehow changed. The high prevalence of leprosy has led to the fact that Europeans are increasingly resistant to the disease. This was influenced by natural selection, including lifelong social isolation of patients who lost the opportunity to continue their race. 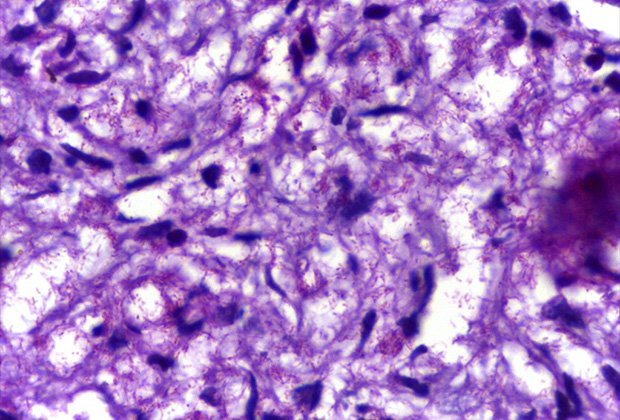 A breakthrough in understanding the disease was made in the 19th century, when the Norwegian doctor Gerhard Hansen discovered the true culprit of leprosy – M. Leprae. He showed that the disease was not inherited, as some of his colleagues thought. Hansen demonstrated that the isolation of patients had a rigorous scientific basis: the disease was caused by microorganisms that could be transmitted from person to person. On the recommendation of a doctor in Norway, patients were banned from moving freely around the country, they were required to be isolated in hospitals or stay at home. Such measures showed high efficiency, because in the end the incidence of leprosy fell sharply. The Norwegian experience was then adopted by other European countries.

There was no effective treatment for leprosy until the 1940s, when Promin was synthesized – at that time the only known drug with bactericidal activity against M. Leprae. However, already in the 60s, mycobacteria developed resistance to it, so doctors switched to other compounds: clofazimine and rifampicin. Then doctors began to use all three drugs as a combination therapy, which prevented the emergence of resistant bacteria strains.

Now around the world, about 200 thousand cases of leprosy are recorded per year, but with timely diagnosis, the disease is completely treatable. Despite international prevention, treatment, and education measures, stigmatization of patients remains an acute problem in developing countries, where leprosy is still common and common among poor and marginalized groups.

In many parts of the world, folk beliefs and religious interpretations of diseases still reign, due to the low level of education. In Brazil, it is believed that leprosy is associated with sexual licentiousness, and that the disease is sent as a punishment for sins and moral misconduct. In India, lepers are equated with the untouchable caste, and this status remains even after the person has been cured. As a result, patients with leprosy become outcasts, they lose their jobs and homes, they are expelled from the family. A justified fear of being alone makes diagnosis and early treatment of leprosy difficult, and this is one of the reasons why humanity still has not been able to finally defeat the disease.

3 most likely scenarios for the end of the world

Shown are the regions that most pollute the oceans

3 most likely scenarios for the end of the world

Shown are the regions that most pollute the oceans