(ORDO NEWS) — Perhaps the origin of the diamond-shaped asteroid Ryugu has been unraveled: it may be the remains of a long-dead comet.

On the surface of the asteroid is an unusual amount of organic matter.

A new origin theory, based on results from Japan’s Hayabusa2 mission, suggests that the 0.8km-wide asteroid is actually the rocky remains of a comet. It is likely that she, having lost the ice, was squeezed by her own gravity.

The new suggestion may explain some of the unusual observations made by Hayabusa2. The spacecraft, launched in 2014 and rendezvoused with Ryugu in 2018, spent a year studying the rocky surface of the asteroid before returning to Earth in 2020.

These data, combined with remote observations, led to several conclusions: Ryugu is made up of many small rocks, and not from one large boulder, it has been deformed into a top shape due to rapid rotation and consists of an unusually large amount of material that is rich in carbon.

This abundance of organic matter defies the prevailing theory that Ryugu was created by the collision of two larger asteroids.

We are talking about chemical compounds containing carbon-hydrogen bonds. They are not usually found on asteroids, but they are also found inside comets. This is because comets form in the colder outer regions of the solar system, where clouds of organic matter mix with rock and ice.

Solar heat is slowly melting new comets that roam the inner solar system (bordering the asteroid belt between Mars and Jupiter). This melting causes the ice to leave the comet in a trail that resembles a long tail. It was this melting process that created the Ryugu, the remnants of gravity-compressed rock and organic matter left behind by the evaporation of ice.

The first author of the study, Hitoshi Miura, an associate professor of materials science at Nagoya City University in Japan, said that this melting process could have caused “the comet’s nucleus to lose mass and contract, which increased its spin rate.”

This rapid rotation may have given the comet’s core “the rotational speed needed to create the shape of a top, ” Miura said in a statement.

To further support their theory, the researchers built a simple model and used it to calculate the time it would take for Ryugu to melt completely. The model showed that Ryugu likely spent several tens of thousands of years as a comet before moving into the inner asteroid belt, where it melted and became an asteroid.

Researchers need more evidence to know if they’re right, but that evidence could come soon. NASA’s OSIRIS-REx spacecraft has collected a rock sample from another diamond-shaped asteroid, Bennu.

When it returns to Earth in 2023, evidence of organic matter in the sample could support the theory that the top-shaped asteroids were once comets. This will give scientists important information about the evolution of the solar system. 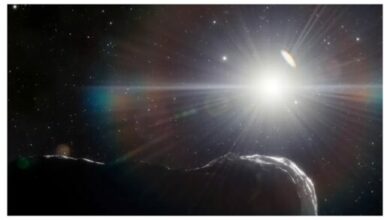