(ORDO NEWS) — The Monk Sisoy was a hermit monk who labored in the Egyptian desert in a cave consecrated by the prayer labors of his predecessor, the Monk Anthony.

During his sixty years of ascetic labor in the wilderness, the Monk Sisoy attained a high spiritual purity and received the gift of miracle-working, so that once, even by his prayer, he brought back to life a dead youth.

A saint of the Orthodox Christian Church, a hermit, a hermit monk Sisoy, has been depicted in lives over the open tomb of Alexander the Great for hundreds of years.

Saint Sisoy is a mystery to both classical and Byzantine archeology. Specialist scholars are trying to interpret the symbolism of the respective lives (the first of which date back to the 14th century AD), as well as convincingly answer the question: Did Saint Sisoy really see the tomb of Alexander the Great? 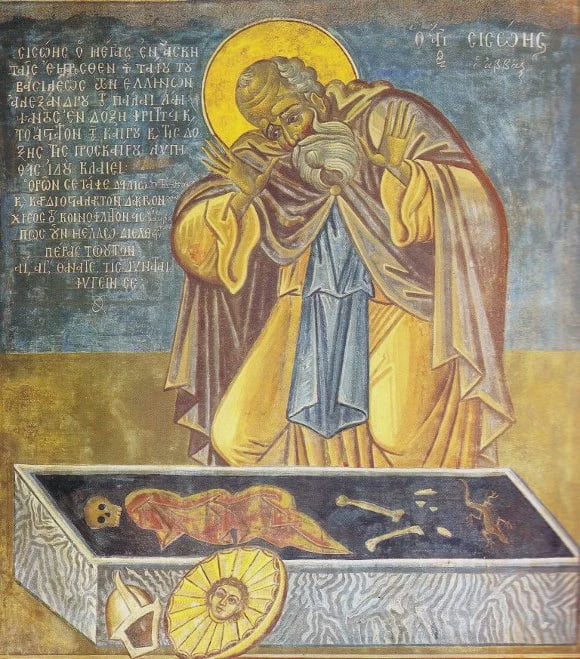 The existence of Saint Sisoy was pointed out by Mr. Sotiris Athanaselis, professor of toxicology at the Medical School of the University of Athens.

“Seeing you, grave, I am horrified and frightened at the sight of you and shed tears from my heart, remembering the debt that all people must pay (that is, death), therefore such an end will befall me. Oh, you, death, who can avoid you?”

“This scene depicted in the fresco, besides the impression it made on me, also gave rise to some reasonable questions which I tried to investigate. 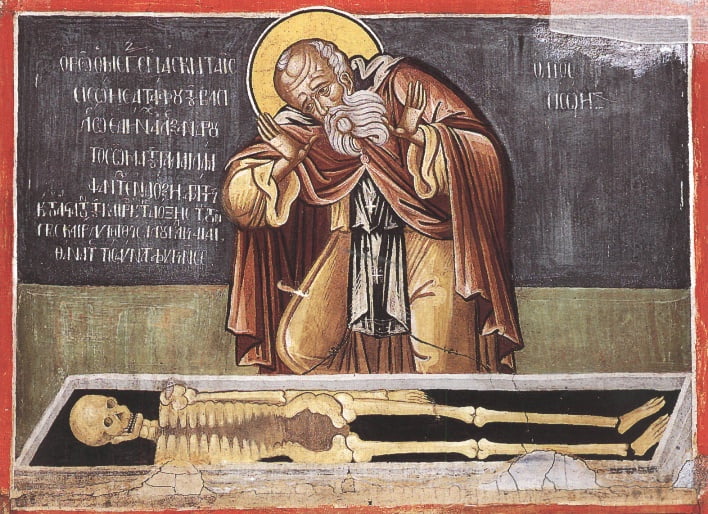 The disciples of Saint Sisoy, who are considered the first to depict the relevant scene, describe it as follows:

“Sisoy the Great in asceticism in front of the tomb of Alexander the Great, frightened by the glorious past, grieving for the inconstancy of time and temporal glory, here he is mourning.”

His memory is celebrated on July 6, he belongs to the first generation of great hermits who followed Anthony the Great. In ascetic and hagiological texts he is characterized as “Osios (= saint, monk) Sisois” or “Abbas (= father) Sisois”.

Sisoy was a Coptic by birth. Withdrawing from the world in his youth, he retired to the desert of Skete and lived for some time under the guidance of his teacher, Abba Ora. The desire to find an even more deserted refuge prompted him to cross the Nile and take refuge in the mountain, where St. Anthony the Great had died some time before. 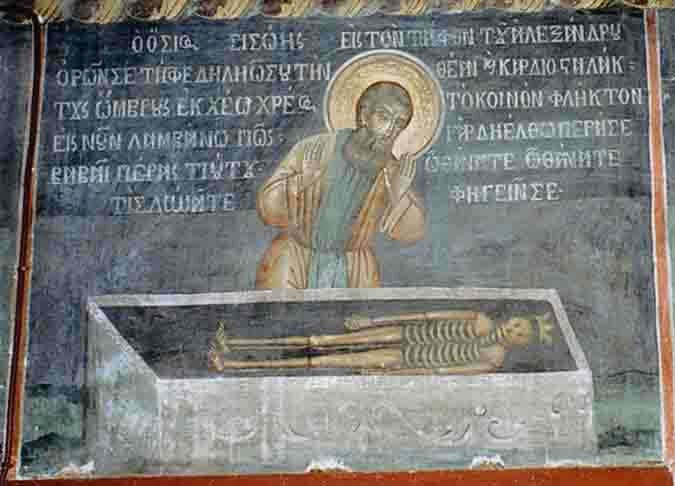 Abba Sisoy Monastery, located in the Nitria Valley in the Wadi el-Natrun region of Egypt, is one of the ancient monasteries of Skeet, the cradle of Christian monasticism, active since the 4th century AD. The monastery houses a relic of St. Sisoy, which is said to have been perfectly preserved on a red cloth.

The monks claim that Saint Sisoy often performs miracles for true believers, and is also considered one of the most important saints of the Coptic Christians of Egypt.

In the first images, made in the 16th century, he is depicted as a respected elder. In all hagiographies, Saint Sisua is always depicted next to the tomb of Alexander the Great, reflecting on the futility of life and the inevitability of death.

But why exactly Alexander the Great, and not someone else?

There is a similar image in the monastery of the Greatest Brigadiers in Milies Pelion (1774). To all this, one should also add a relatively late image in the church dedicated to the Assumption of the Virgin in Kukuli, Zagori (1788).

Of particular importance is the life of Agios Ioannis the Theologian in the monastery of Panagia Mavriotissa, in which Saint Sisua is depicted in front of an open tomb, where two other skeletons are depicted along with the skeleton of Alexander the Great. According to one version, this is a declarative element of the posthumous equality of kings and non-kings.

But does this image indicate the burial of Alexander the Great in polyandry? 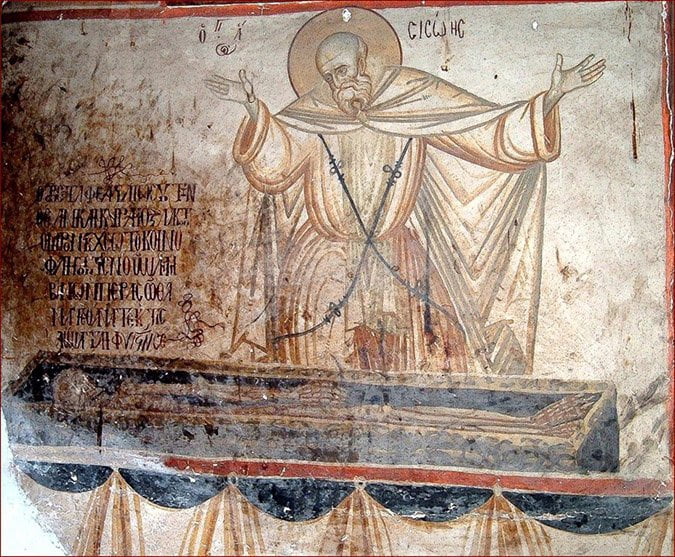 In the life of Kukuli, another (and unique in relation to other lives) is that on the head of the skeleton of Alexander the Great is a golden crown.

Dorotheus, Bishop of Tire (255-362 AD), after returning from exile during which he worked as a slave in the mines of the Zion oasis in Egypt, declared that its inhabitants were pagans and worshiped the Egyptian god Ammon, as well as Alexander the Great who was buried there.

Knowing about the extensive discussions that have been and are being conducted to establish the exact location of the tomb of Alexander the Great, we may wonder why Saint Sisua is always depicted in front of this tomb? 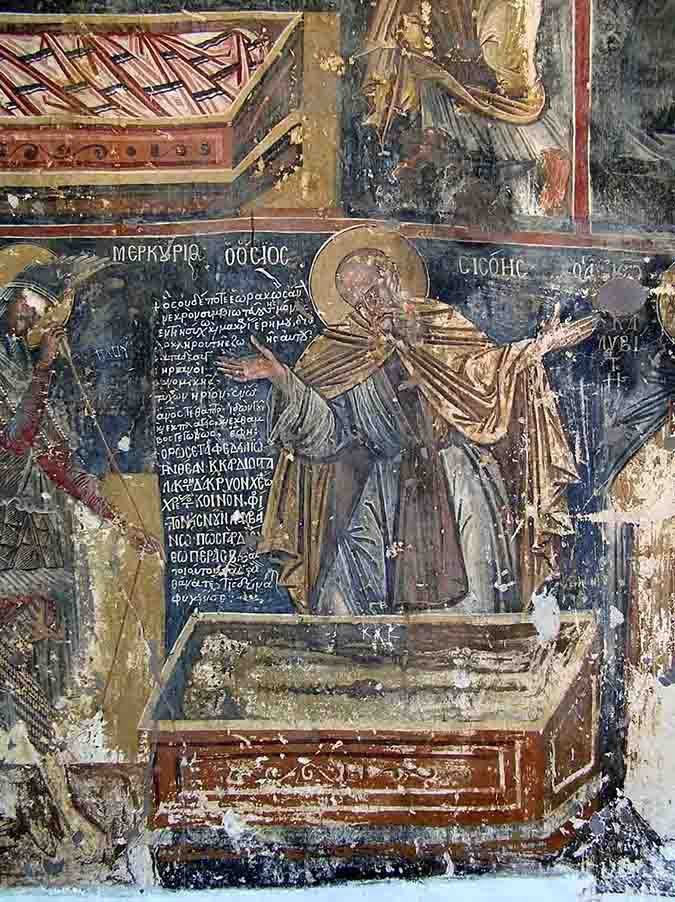 Did Saint Sisua really find the tomb of Alexander the Great somewhere where he was a monk? Is this, as the corresponding biography shows, a depiction of a real event?

If we find and establish the exact routes of St. Sisoy, will the legendary tomb of Alexander the Great be found? These are certainly very interesting questions that I would like to have answered. 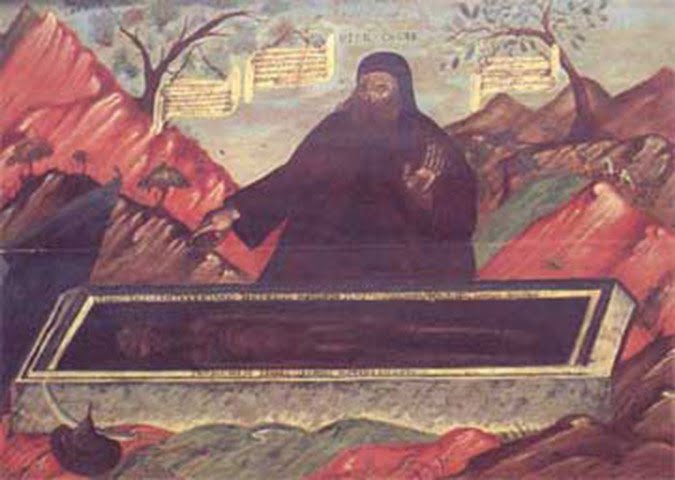 The question posed by the case of Saint Sisoy is whether his depiction should be taken as “literal” or whether its symbolic meaning should be studied. In the first case, the analysis should be focused on the study of historical data about Sisoy’s visit to the tomb of Alexander the Great.

In the second, however, archaeologists emphasize how the hagiography reflects “the fear of death of the entire Byzantine world, which saw the collapse of the empire and philosophized about the futility of the world.” 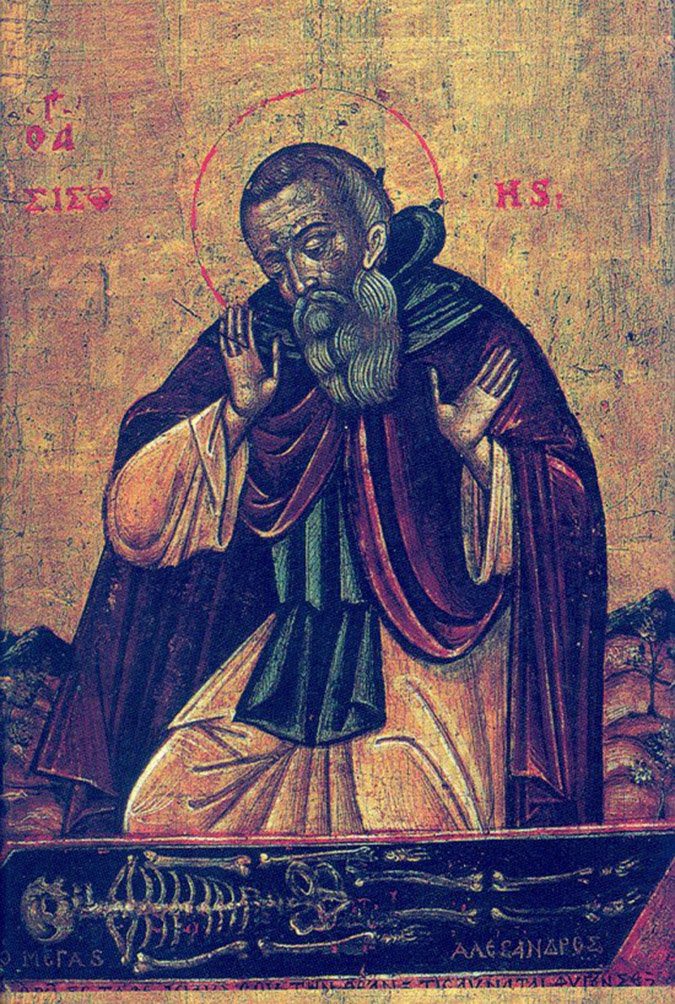 In addition, the fact that the tomb of Alexander the Great appears on the images of St. Sisoy seems to be a later addition, probably by the Theban hagiographers George and Francos Kontaris, who in 1556 painted the monastery of Varlaam in Meteora.

Thus, if before that time Osios Sisoy was presented over the open tomb of a stranger, then after the intervention of two brothers, he was found over… the sarcophagus of Alexander the Great, precisely in order to further emphasize the futility of the mundane.

Wars of the Diadochi: Generals of Alexander the Great in the struggle for power

Wars of the Diadochi: Generals of Alexander the Great in the struggle for power