(ORDO NEWS) — One afternoon in 1665, sitting in the garden of his mother’s house in the English county of Lincolnshire, Isaac Newton saw an apple fall from a tree branch.

And then Newton thought: if the apple fell because it had no support, then why doesn’t the Moon fall to the Earth , which also has no support?

Undoubtedly, Isaac Newton was not the first person to wonder why the moon does not fall to the Earth. However, he was the first to give a scientifically sound answer to this centuries-old question.

So, in short, the Moon does not fall to the Earth like an apple, because it is in motion, which counteracts the force of gravity and keeps it in orbit.

For the same reason, the Earth and other objects of the solar system do not fall on the Sun, but continue to revolve around it (more precisely, around a common center of mass).

In addition, the Earth pulls the Moon with less force than an apple, because our satellite is much heavier and much further away.

If you take a rope (three meters will be enough) and attach, say, a volleyball to one end, and fasten the other end to your waist, then during a quick rotation around its own axis, you will find that the rope will stretch and the ball will begin to rotate along with us.

It is noteworthy that the ball will be turned to you with one side (like the Moon to the Earth) and at the same time it will not fall to the ground or touch us. 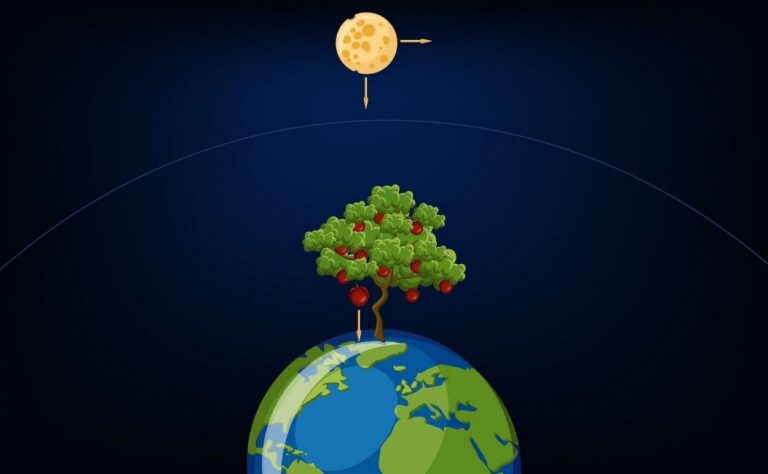 Newton, having witnessed the fall of an apple, eventually realized that the same force is behind this phenomenon and the movement of cosmic bodies. In 1666, Newton derived the law of universal gravitation , which describes the gravitational interaction of bodies within the framework of classical mechanics.

The moon constantly falls to the Earth, which attracts it to itself and does not allow it to “escape”. However, the speed of the Moon is so great that its trajectory follows the curvature of the Earth and prevents the natural satellite from colliding with us. The centrifugal force is responsible for this.

A similar principle is used in artificial satellites of the Earth, which behave in the same way as the Moon: they fall, but at the same time they move at great speed.

To launch a satellite into orbit, it must be launched at a fixed speed so that its trajectory coincides with the trajectory of the Earth’s movement and, thus, it could stay in orbit of our planet for the longest possible time. When the vehicle runs out of fuel, it deorbits and rushes to the surface, burning up in the atmosphere.

The reason why the Moon revolves around the Earth causes the Earth and all other planets to revolve around the Sun.

This central star is of enormous size and mass and has absolute dominion over all interplanetary space. Since the distances are huge, the speed of movement of planets and comets around the Sun is quite low (the farther from the Sun, the slower the speed).

The planets travel in elliptical orbits, little different from circular ones; comets move in very elongated elliptical orbits, gaining tremendous speed at the moment of approach to the Sun, which makes it possible to avoid falling into a star. That is, all objects in the solar system are actually continuously falling on the sun (and around it).

Newton and his laws

Isaac Newton derived the law of universal gravitation based on the fact that the same forces act on cosmic bodies and on ordinary objects on Earth.

For example, if the distance from the Earth to the Moon were halved, then the force of gravitational attraction between them would increase four times. 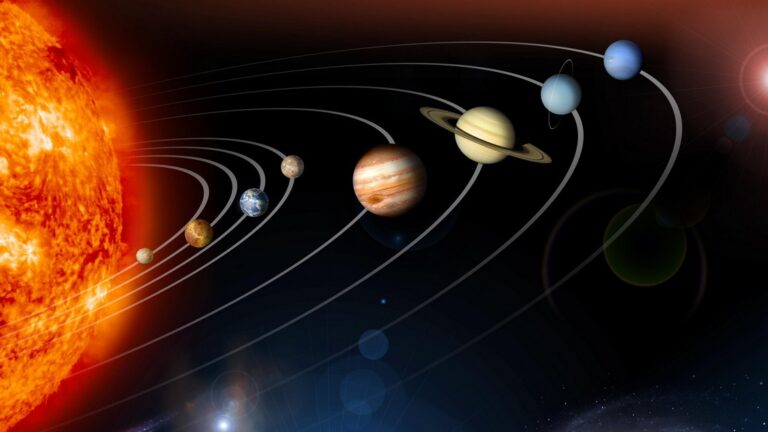 The three most important laws of classical mechanics

Any material point continues to remain in a state of rest or uniform motion until a force (F) is applied to it.

This force is equal to the product of the mass of the body and the acceleration of its movement (F = ma).

Lucy spacecraft took pictures of the Earth and the Moon

Lucy spacecraft took pictures of the Earth and the Moon