(ORDO NEWS) — A new hypothesis has been proposed to explain the unusually short length of the forelimbs of the fossil predator.

The short front legs of tyrannosaurs have been the subject of scientific controversy since their discovery. And they are so short that they did not even reach the predator’s mouth. At the same time, judging by the traces of muscle attachment on the bones, they were quite strong.

Many hypotheses have been proposed over the century. Some scientists assumed that the forelimbs helped the tyrannosaurus to hold the female during mating (we will omit the question of why they are in this case for the female, who does not need to hold anyone, and they are short for such purposes).

Others – that with them he butchered prey, which he held with powerful jaws. Still others believed that the paws were rudimentary and T.rex did not use them (however, it is not clear where the strong muscles came from then). And then they made up memes.

Paleontologist Kevin Padian from the University of California at Berkeley (USA) proposed his hypothesis. The corresponding work was published in the journal Acta Paleontological Polonica.

He began by changing the wording of the question itself. People usually ask: “What could a Tyrannosaurus rex do with such short legs?” Padian asked: “Why did the legs of the tyrannosaurus become short?”

The fact is that, judging by the findings, early tyrannosauroids, like some other theropods, had significantly longer forelimbs.

They have decreased, but why? According to Padian, the front legs were not needed by the tyrannosaurus when hunting – the whole process was provided by huge jaws. That is, the “paws” did not have any functional load.

At the same time, the scientist relies on a number of finds of “packing” tyrannosaurs. In different places, groups of paleontological remains belonging to different individuals of tyrannosaurs were found. Then paleontologists suggested that these predators hunted in groups.

Padian writes that in the case of a group hunt for the carcass of a caught animal, several predators claimed at once. They could eat prey at the same time.

He invites readers to imagine such a picture: huge powerful jaws gnaw and grind flesh and bones. What if two tyrannosaurs were operating their jaws too close together? Or did it seem to one of them that the second was claiming a more tidbit?

There are finds of the forepaws of T.rex, on which intravital injuries are recorded. But there is no comparison between tyrannosaur injuries and earlier theropods with longer forelimbs. Padian believes that the paws, which do not aid in hunting, may have evolved into “paws” to avoid being accidentally or deliberately bitten by fellow prey eaters.

Severe bite wounds can cause infection, bleeding, shock, and eventually death, he said. Accordingly, the reduction of the forelimbs may be beneficial, since they are not used in predation anyway.

At the same time, Padian admitted that any hypothesis, including his own, will be difficult to confirm 66 million years after the extinction of the last species of tyrannosaurs, but a correlation can be revealed if museum specimens around the world are checked for bite marks. If fewer bite marks are found on the reduced limbs, this may be a sign that the reduction has worked.

At the same time, the new hypothesis still does not answer the question of why there are traces of rather strong muscles on the bones of the forepaws. If they weren’t used in predation, how were those muscles supported there? Of all the assumptions put forward so far on this score, only one looks at least relatively satisfactory.

Tyrannosaurs, like us humans, ran on two hind limbs, and such a run can create a significant twisting moment. Its compensation in those who do not have forelimbs (ostriches) occurs due to the vigorous work of the muscles of the body.

However, if the movements of even very small limbs are used to compensate (as people do when they swing their arms while running), it will be somewhat easier to avoid twisting. However, this hypothesis has problems with testability: observations of living tyrannosaurs are not available to us. 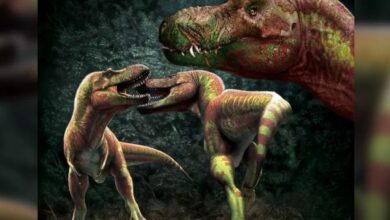 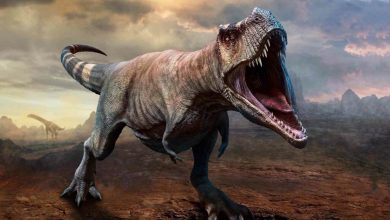